September 16, 2020 — When Dean and Donald J. Farage Professor of Law Danielle M. Conway joined Penn State Dickinson Law last year, she laid out a set of vision priorities. One of them was to substantially “move the needle” on diversity for incoming classes to the Law School.

That effort has been extremely successful. The Class of 2023 enters as one of the most diverse classes in the history of Dickinson Law. Nearly half, 44 percent, identify as students of color, up from 22 percent last year. Almost a fifth identify as members of the LGBTQ community, also nearly double from last year. Ten percent come from outside the United States, including students beginning studies to earn their master of laws or doctor of juridical science degrees. 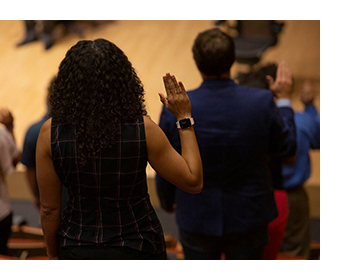 During the convocation ceremonies, held during the week of August 17, Conway welcomed this standout group of new students by saying she was “thrilled” they had chosen the legal profession. “I know better than most that this profession needs you,” said Conway.

She then shared a deeply personal story of watching the Democratic National Convention the previous night with her 8-year-old son, who asked her, “Mommy, will that happen to me?” He was referring to the shootings of young men of color that were discussed during the convention.

“I am not ashamed to tell you that my response was wholly inadequate last night. I told him, ‘Stay close to mommy and daddy, and we will do our best to protect you,’” said Conway. She then told students that the next morning, she realized she should have given her son a different answer.

“We are here to teach, not to preach. We will, at times, have uncomfortable conversations,” said Professor Mogill. “Law school is hard; it is supposed to be. We want to make you confident in your own sense of competence but realize that it is sometimes easier to ask questions than to find certainty in answers.”

Students felt inspired by the messages from Conway and Mogill. “I came to law school because I want to make a difference,” said first-year Dickinson Law student Rhabiya Alhassan ’23. “I want to be the one who makes the changes I wish to see in the world, and law school is just the first step in reaching that goal.”

Every opening of a new year at Dickinson Law is exciting, and each one is a bit different. This year began very differently indeed, with the opening ceremony taking place amid the COVID-19 pandemic, which has sparked so many changes over the past six months.

In fact, convocation consisted of two sessions with one held simultaneously on Zoom to allow students to socially distance. Speakers wore masks as they addressed students, and some faculty members appeared via a video rather than at the live event.

But while the trappings of convocation may have changed, the purpose stayed the same. “Dickinson Law uses convocation to recommit to the Law School’s core values and introduces these core values to our new community members, which include new students, new staff, and new faculty members,” said Conway after the ceremony. “Students should take from convocation that they are part of an intellectual enterprise that values inquiry, integrity, and empathy.”

Alhassan appreciated the sense of community conveyed by Conway, Mogill, and other speakers. “I chose Dickinson Law because it was different,” said Alhassan, who served as the Community Service Chair for the Black Pre-Law Association while she was an undergraduate student at UNC-Wilmington. “From the moment I was accepted, there was a feeling of comfort and acceptance in all of the communications I received. The faculty and students were all so welcoming.”

The Class of 2023 demonstrates diversity in many ways. The students have already made an impact on the world. Their accomplishments include creating a youth group engaged in activism and volunteering, founding an organization to provide hygiene products and school supplies for young girls, and establishing a foundation to teach sex education to youth in Ghana.

The Class of 2023 includes a student who worked at the Ohio Innocence Project and a former field biologist for the Arkansas Game and Fish Commission as well as a screenwriter, a Pushcart Prize nominee, and a Fulbright Scholar.

“While I attended the CLEO PLSI program, I felt comfortable with Dean Conway, Dean Dodge, Dean Saidman-Krauss, and the Dickinson Law family. I wanted to attend law school in New York, but after receiving Dickinson Law's support during CLEO, albeit via Zoom, I knew that both my academic success and personal goals would be supported here,” said Garcia, one of four CLEO PLSI program graduates to begin their legal education at Dickinson Law this fall.

He believes Dickinson Law will help him reach his future goals. “I want to change laws that are barriers of access to members of society who identify as BIPOC [Black, Indigenous, and people of color], I want to represent more professionals of color in the legal field, and I want to understand laws on a fundamental level.”

Members of the Class of 2023 have begun getting to know each other, despite the challenges of attending law school during a pandemic. Classes are being offered both in person and remote-only, based on students’ unique needs.

Students attending the fall semester entirely remotely, such as first-year Dickinson Law student Schenley Kent ’23, appreciate the focus on outreach. “The faculty and staff at Dickinson Law have been so supportive and inclusive to my needs,” said Kent. “My professors have taken measured steps to ensure that I am active and engaged in class discussions. I also appreciate that although I am not on campus with other student colleagues, I have been able to make meaningful connections with some of them.”

While convocation may have been different this year, it remained, in Conway’s words, “a formal event that obligates everyone in the Dickinson Law community to join together to welcome new members, to recommit to a purpose greater than ourselves, and to set personal and professional expectations for the next academic year.”

For this year, that commitment is clear. “The Dickinson Law convocation marks our launch into the academic year with our core values leading us in our service to the rule of law and a resolve to make our society fair and just for all,” said Conway.