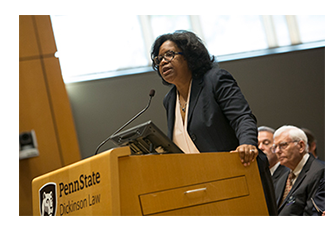 Every convocation at Penn State’s Dickinson Law reflects the excitement and promise of a new year. The 2019 edition boasted something more. It also marked the installation of the new dean of the law school, Danielle M. Conway, who also serves as Donald J. Farage Professor of Law.

During the hour-long ceremony, Conway urged students to think about the rule of law’s relationship to a free society and to consider their power to transform society. Convocation, she later tweeted, was a “testament to the power of the rule of law to bind us together and to celebrate our humanity.”

“You must begin to grasp the enormity and the grandeur of the concept [of the rule of law] and your role in it,” Conway told a rapt audience during the ceremony held September 20 in the Apfelbaum Family Courtroom and Auditorium, Lewis Katz Hall.

Convocation opened with the introduction of Mary Allen Lindemann, a close friend of Conway’s and co-founder of Coffee By Design, a Maine-based coffeehouse and roaster dedicated to giving back to the community.

Lindemann recounted her first interaction with Conway, describing her as a catalyst who can change the energy in the room. “She is laser-focused on finding ways to engage and ensure legal access to those who, for whatever reason, had been forgotten,” Lindemann said. “She made people feel seen and heard.”

With the assistance of Dickinson Law colleagues, Lindemann surprised the new dean with a memorable demonstration of Burundi drumming by Yves Karubu. Then Conway stepped to the podium.

She began by outlining Dickinson Law’s role to “prepare you for how you will serve our community” and emphasized that, regardless of position or power, no one is above the rule of law.

“The sheer beauty of our constitutional democracy is its constant courting of tension and internal conflict and meeting both head-on in processes like negotiation, legislative action, and judicial dispute resolution, which give us our best chance of problem-solving on the grand scale required of an enlightened society,” Conway said.

She segued into the role the law plays in protecting the most vulnerable in society. “Our goals as a people are realized when the least among us is treated with dignity, equity, and respect,” she said.

These ideals drew many new students to Dickinson Law. The incoming class includes almost 22 percent students of color and over 10 percent who self-identify as LGBTQ. More than 20 percent are first-generation college graduates, and nearly eight percent served in the military.

As undergraduates, they attended Ivy League schools such as Cornell University, historically black colleges like Howard University, and Pennsylvania institutions including Franklin & Marshall and Penn State. They also have proven their commitment to giving back through volunteering with HELP for Domestic Helpers in Hong Kong, American Red Cross, Peace Corps, Project Hope in Beijing, and Girl Rising to name a few.

They bring a diversity of life experience as well. First-year law student Kate Kuhn spent the past decade as a Jesuit volunteer and social worker in Illinois at a refugee resettlement program. She hopes to specialize in immigration law. So far, Kuhn has found the Carlisle community friendly and supportive. “A lot of what we’re reading is interesting,” she said. She is thrilled with Dickinson Law’s proactive approach to teaching. “We’ve had two simulations so far, and a friend I talked to at another law school is still doing a month of reading.”

Mitch Snyder, a first-year law student, has known he wanted to go to law school since high school. He attended Dickinson College as an undergrad, and he dreams of doing trial work. He’s already discussed his goal with his professors. “I love the experiential learning we’ve been doing the first two weeks with negotiations,” he said. “We engage with the material we’re learning.”

After growing up in Queens Village, NY and attending Howard University in Washington, D.C., Campbell Goin appreciates Carlisle’s slower pace, which balances out the intensity of the classes. He enjoys exchanging “hellos” with students and Carlisle residents as he walks down the street.

Goin has engaged with his professors, too, revealing his entrepreneurial ambitions and bonding over time lived in New York City. He shared that getting to know them in a personal capacity holds value. “Finding commonality with people makes it so much easier. We broke the ice,” he said. “I can say, ‘I didn’t understand this word, can you piece it together?’”

Questioning things is a part of law school, agreed third-year law student and Honor Code Chair Lucia Cuenca, who spoke at convocation. She referenced the Statement on Professionalism first-year law students sign near the end of convocation, noting it “requires standards of professional responsibility, civility, integrity, and respect.” She said she would add two more: gratitude and curiosity. Everyone, she noted, wants to use those concepts to leave the world “a little better.”

Conway, too, looked to the future to wrap up convocation. “Law’s power derives from it being accessible. Your very presence here consolidates that power. We will project you into the future, not for your own benefit but for the collective benefit of our society,” she promised.

View photos from the event.

Dickinson Law Dean and Donald J. Farage Professor of Law Danielle M. Conway urged students to think about the rule of law’s relationship to a free society and to consider their power to transform society during her keynote address at the Law School’s annual convocation on Friday, September 20, inside Lewis Katz Hall, Carlisle.