November 18, 2019 — Atrocity crimes and their legal implications have been in the news of late. Last year, then-U.S. national security adviser John Bolton set off a national debate when he criticized the function of the International Criminal Court, whose stated mission is to punish and deter atrocity crimes.

Penn State Dickinson Law Professor Dermot Groome has seen the personal, moral and legal implications of atrocity crimes firsthand. He led the International Criminal Tribunal for the former Yugoslavia (ICTY) prosecution of Bosnian Serb General Ratko Mladic for the 1995 Srebrenica massacre, the Siege of Sarajevo and the ethnic cleansing of Bosnia.

Groome worries too many young people are unaware of this history, and he wants to raise their awareness. He helped organize “Responding to Atrocity Crimes,” a symposium held at Dickinson Law this fall, one of two events held in Carlisle that focused on genocide and justice. 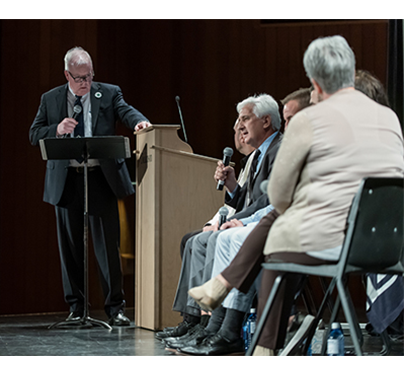 The symposium saluted the publishing of a new book, “International Crimes: Law and Practice, Volume I: Genocide” by Judge Guénaël Mettraux, who serves in the Kosovo Specialist Chambers in The Hague. For the past year and a half, several students at Dickinson Law have assisted Mettraux, a Dickinson Law affiliate faculty member, with research for the book.

Attendees at the event, including many Dickinson Law students and faculty, heard from internationally recognized legal experts as well as a Dickinson Law staff member who witnessed genocide as a child in Africa. “Informing ourselves about the atrocity crimes and our historical response to them are important if we are to prevent them in the future,” said Groome. “It is in our national interest to be concerned about atrocity crimes.”

Atrocity crimes encompass three categories of crimes: war crimes, crimes against humanity and genocide, a legal term coined after World War II to describe the murder of 6 million Jews by the Nazis during the Holocaust.

Groome noted genocide is “extremely difficult to prove” and can be hard to prosecute. He thinks it is critical, though, for students to learn about it. “We want to inform young people about the genocide in Bosnia and these issues generally. This is a part of recent history most young adults are not aware of,” said Groome.

The symposium included three main parts, combining research and personal reflection. Mettraux gave a talk on researching genocide, its role in law, and what he learned while writing the book.

“Guénaël has spent the last several years investigating every judgment and court decision addressing the crimes of genocide. He systematically and exhaustively reviewed the work of international and domestic courts,” said Dickinson Law Dean and Donald J. Farage Professor of Law Danielle M. Conway. “During the course of his work, Guénaël asked Dickinson Law for research assistance. For the last one and a half years, several students have worked closely with him to finalize the text and check all of the sources. We are proud of their contribution to the book.”

“I worked on Volume 1 during the summer of 2018, after my first year of law school,” said Sarah Zomaya, a third-year Dickinson Law student. “I completed a lot of work with the bibliography and footnotes, ensuring the citations were in the correct Oxford University Press form. I learned in detail about each element of genocide and how the law has been applied.”

Alumna Olivia Phillips, 2019, served as lead research assistant on the book, which meant editing, organizing, researching and formatting sources. She was taking Groome’s International Criminal Law class when he recommended her for the project in 2018. While she notes she was familiar with the current state of the law on genocide, “I did learn a lot about the origins of ‘genocide’ as a term and as a concept, and how the law on genocide has evolved since its inception,” she said.

The symposium also included a panel on the American experience dealing with atrocity crimes, led by James Finkel, the co-founder of the Atrocities Prevention Study Group of the Stimson Center in Washington, D.C. Another panel, led by Max du Plessis, S.C., who has appeared before the Constitutional Court of South Africa and the Supreme Court of Appeal, discussed the African experience addressing atrocity crimes. That panel also included Dickinson Law Associate Director of Development Cheryl Isaac.

Isaac grew up in Liberia during the First Liberian Civil War, where she witnessed the types of atrocities described at the symposium. Groome asked her to provide a personal view to add dimension to the academic arguments.

“I was honored to sit on the panel,” said Isaac, who came to the United States in 1996 when she was 15 years old. “Academics do such great work, but often they never get to hear the visceral perspective from people who benefited from that work.”

She described watching TV coverage of the tribunal for former Liberian President Charles Taylor, who was convicted of war crimes. “I remember thinking, yes, someone has heard and seen some of the things our people have gone through,” said Isaac.

“She was able to offer critiques from a perspective that I think at least one of our scholars hadn’t fully considered,” noted Groome. “Cheryl made the valid point that victims are expected to cooperate with domestic atrocity crime prosecutions in many countries in the United Nations who could prosecute them under the principle of universal jurisdiction, and is that practical to expect of them?”

Rachel Wilcove, a first-year law student and Dean’s Fellow, attended the symposium. She hopes to work for the International Criminal Court one day and found the symposium deepened her understanding of the challenges the ICC faces.

“The symposium was most effective at conveying the technical side of the international prosecutorial system. This is arguably a side that is overlooked, perhaps because it is not as compelling as listening to victims’ stories,” said Wilcove. “I walked away with a more profound understanding of the difficulties that arise from a legal standpoint.”

The symposium took place shortly before another event related to atrocity crimes held at Dickinson College. “Genocide, Justice, and Hope: How 400 Bosnian Families Became Neighbors in our Central PA Community” included a screening of “The Trial of Ratko Mladic,” a documentary about the Mladic trial featuring Groome that aired on PBS’s “Frontline” earlier this year.

“Following the screening, we heard from a panel of Bosnian genocide survivors, including my friend Almaden Sakic,” said Christos Loizou, a first-year law student and Dean’s Fellow. “At seven years old, he had to run for his life to evade gunfire. His parents sacrificed their lives for him and his siblings to escape the Bosnian War and bring them to the United States. As I listened to his personal survivor story, I began to emotionally understand that genocide is a crime against all of us.”

“The series of lectures surrounding the legal issues in prosecuting genocide was an invaluable learning experience and a great first exposure to this area of international law,” added Deborah Osborne, also a first-year law student and Dean’s Fellow. “It helped provide legal background for the incredible ‘Genocide, Justice, and Hope’ event.”

During the sold-out event, Groome asked everyone to hold up their fingers to indicate how many loved ones they lost to genocide. “There were quite a few Bosnians in the audience, maybe a third of the approximately 850 people who attended,” said Groome. “Many of them had to hold up two hands to have enough fingers to show how many people they lost. Everyone I talked to after the event said that was the most powerful moment.”

The Bosnian families cooked for and served attendees an array of ethnic dishes to show their gratitude to Carlisle. “The community has welcomed and supported them — several are doctors or lawyers, they work in local businesses and hospitals, many are supervisors at the area’s local warehouses,” said Groome.

Learning more about these neighbors, like hearing from Isaac, humanized an experience whose horror is difficult to grasp, whether you’re a law school student or co-worker to a Bosnian immigrant.

“You may have seen people and maybe knew they were immigrants, but to hear their stories and hear about the tragedies they dealt with, that’s an important experience,” said Groome.

“These are the kinds of impactful and unique experiences that make the Dickinson Law community an exceptional place to begin the study of law,” said Osborne.
_________________________
Penn State Dickinson Law Professor of Law Dermot Groome moderates a panel during “Genocide, Justice, and Hope: How 400 Bosnian Families Became Neighbors in Our Central Pennsylvania Community,” in which Bosnian genocide survivors shared their stories of loss and resilience, and the new lives they have built in Carlisle and its surrounding communities.