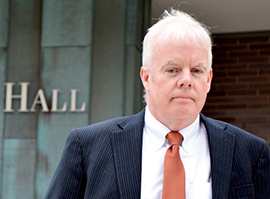 March 12, 2019 — “The Trial of Ratko Mladic,” a 90-minute documentary that debuted at the International Documentary Film Festival Amsterdam (IDFA) last November featuring Dickinson Law Professor of Law Dermot Groome will make its U.S. premiere on Thursday, March 14 at the Dodd Center for Human Rights at University of Connecticut School of Law. It will be broadcast nationally on Tuesday, March 19 at 9 p.m. EST on FRONTLINE—PBS’ flagship investigative journalism series that explores and illuminates the critical issues of our times from business and health to social issues, politics and war.

The documentary captures the essence of “The Prosecutor v. Ratko Mladic,” a five-year war crimes trial led by Groome against the Army of Republika Srpska Commander Ratko Mladic, one of the most infamous figures of the Balkan wars in the 1990s. Mladic was sentenced to life imprisonment after being convicted on November 22, 2017 of genocide, crimes against humanity and war crimes for the 1995 Srebrenica massacre of over 7,000 Muslim men and boys; for leading the nearly four-year siege of Sarajevo, in which thousands were killed; and for the ethnic cleansing of non-Serbs from large areas of Bosnia and Herzegovina.

Groome led the prosecution of the case once Mladic, who was a fugitive for 16 years, was arrested in May 2011.

“Two well-known and well-respected documentary filmmakers Henry Singer and Rob Miller approached the tribunal with a proposal to follow the case and produce a documentary that would give viewers an inside look at the work of the different participants in the case: prosecution, defense and victims/witnesses,” said Groome. “Henry and Rob faced the impossible task of distilling several years of one of the largest international prosecutions in history—one with nearly 600 witnesses, thousands of hours of court proceedings and almost 10,000 exhibits—into a 90-minute film.”

Groome, who appears in a number of scenes throughout the film, including presenting the opening statement, conducting staff meetings, and working at the site of a mass grave in Tomasica, Bosnia, was initially reluctant to participate, but agreed to do so after believing the filmmakers fully appreciated the sensitivities of all witnesses—both prosecution and defense—and would educate the public about the important responsibilities and work of international prosecutors.

Thomas J. Parsons, Ph.D., adjunct professor at Penn State Eberly College of Science who directs Forensics Sciences for the International Commission on Missing Persons (ICMP), provided testimony during the trial as an expert witness for the prosecution, in which he explained the methodology ICMP used to analyze the remains found in mass graves that were revealed through aerial imagery provided by the U.S. and others.

“Dr. Parsons gave evidence that helped establish the identity of the victims of the Srebrenica massacres,” said Groome. “His work was not only an important contribution to the evidence in the case, but also gave the families of the victims the ability to bury their loved ones with dignity.”

In addition to its premiere at the IDFA, the film will be screened at a number of U.S. and international law schools in the coming months. It most recently was shown in Oslo at Human Rights/Wrongs 2019, an international film festival designed to draw attention to important films related to human rights. Plans are underway to screen the film at Penn State this year.

Groome has extensive prosecutorial, investigative and international experience. Prior to joining the Dickinson Law faculty, he spent more than 11 years as a senior prosecutor at the ICTY, where his work included a senior role in the Bosnian indictment against Slobodan Milošević, and the prosecution of Milan Lukić and Jovica Stanišić, the head of the State Security Service in Serbia. Groome is the author of the Handbook of Human Rights Investigation(2001, 2011), has appeared as an expert before the Human Rights Council and is a member of an expert group advising State Parties to the International Criminal Court. He most recently is tackling the problem of crimes against child soldiers and calling for a reconceptualization of how we approach the problem. He began his legal career as a prosecutor in Manhattan where he was a member of the Sex Crimes Unit. He supervises the Law School’s Center for International Trial Advocacy and International Justice Program at The Hague, Netherlands.

Dickinson Law Professor of Law Dermot Groome, who led the prosecution in “The Prosecutor v. Ratko Mladic”—a five year war-crimes trial against the Army of Republika Srpska Commander Ratko Mladic—is featured in “The Trial of Ratko Mladic,” a 90-minute documentary that will broadcast nationally on Tues., Mar. 19 at 9 p.m. EST on PBS’ FRONTLINE.