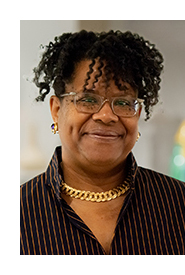 August 2022 — Last year, Penn State Dickinson Law Dean and Donald J. Farage Professor of Law Danielle M. Conway unveiled a project to a close friend, Anna Eleanor Roosevelt, that had been long in the conception and planning stages. Conway instinctively knew that she could trust Roosevelt to give her honest and critical feedback. Conway outlined the concept for an institute offering organizations across the country systems design-based approaches to implementing antiracist practices, processes and policies throughout their functions.

Roosevelt, the granddaughter of former First Lady Eleanor Roosevelt, listened thoughtfully and enthusiastically, then proceeded to immediately brainstorm about people and organizations who would be interested in learning more about the project. Roosevelt is well known for matching people with one another and for extending her network, which includes philanthropic foundations and corporate contacts. She offered an introduction to one of her contacts.

That connection, as it turned out, was more than interested. From Conway’s first conversation with John D. and Catherine T. MacArthur Foundation President John Palfrey, he too immediately grasped the importance and magnitude of the vision for the Antiracist Development Institute (ADI), which was introduced last fall and takes a systems design approach to addressing systemic inequality.

The MacArthur Foundation recently awarded a $500,000 grant to the ADI, to support an eight- to ten-volume book series and development workshops to create more equitable academic and professional communities within legal education and the profession committed to antiracism. The commitment brings the total investment in the ADI by institutions and private donors to over $2 million since its launch in November 2021, including a generous allocation by Penn State.

To show the potential impact, Conway shared with Palfrey the measurable outcomes achieved by using systems design thinking at Dickinson Law, which has more than doubled its percentage of faculty of color and students of color by approaching hiring, retention and admissions in new ways. "In that first conversation with John, I knew right away that he was all in," said Conway. "He said, 'We don't have a category of grants that match what you need, but this is exactly where we need to be.’ I saw that he was ready to work with us, and he found a way to do it.”

“Penn State Dickinson Law, like other law schools around the country, has recognized the need for comprehensive diversity, equity, and inclusion in educational and administrative spaces, from admissions to alumni support,” said Claire Poelking, a MacArthur program officer. “The Antiracist Development Institute moves beyond performative diversity to disrupt systemic injustices, with a focus on oppression rooted in racist policies, practices, or acts. We are proud to support Dickinson Law in the development and demonstration of a novel systems-based approach that situates structural antiracist reform within legal institutions. Our hope is that its replicable model will also benefit other educational entities and nonprofit organizations.”

Conway noted that the impact of the grant is twofold. It provides a financial boost while also opening new doors for the ADI to reach more people. “John understood immediately that when you have the

John D. and Catherine T. MacArthur Foundation saying your work is legitimate, more people will listen to what you’re saying and engage with what you’re doing,” said Conway.

Systems design involves defining the components and processes making up that system and determining how to leverage each component in the work of transformation for improved outcomes. It also embraces a collaborative and user-centered approach. The ADI is building a coalition of law schools to bring systemic racial equality to the forefront. Conway wants people from all backgrounds and all life experiences to feel welcome to contribute. “This coalition does not know hierarchy. This coalition does not know exclusion. This coalition knows collective action and values learning from lived experience and perspective,” said Conway.

Upon its introduction, the ADI received initial seeding from the Law School Admission Council (LSAC), whose mission is to support diverse, talented individuals from prelaw through practice, and AccessLex Institute, a nonprofit that helps talented law students become professionals, as well as the National Association for Law Placement (NALP), which includes career professionals who advise law students, lawyers, law offices, and law schools. In addition to the funding received from external organizations, alumni, and friends, former Penn State President Eric J. Barron allocated annual University support for the initiative.

The ADI will build on concepts and information presented throughout the book series, titled “Building an Antiracist Law School, Legal Academy, and Legal Profession,” to provide law schools and other institutions with a starting blueprint that will be iteratively workshopped through the stages of systems design and design thinking. “We do not claim to be able to solve all of the problems caused by systemic racism, but we are helping people and the organizations and institutions they work in to think about how to solve them,” said Stallworth.

Investments from the MacArthur Foundation, Penn State, LSAC, AccessLex, and NALP, will help the ADI spread its work further. “These investments matter because our grantors and donors want to see us disseminate our findings widely without the need to charge for access to the results of the project,” said Conway. “It is rare for one law school to attract an institutional grantor of the highest caliber, but the foundation understood this project was meant to involve all 200+ law schools to scale institutional antiracist work. These investments say that we are onto something relevant, important, and necessary, and give us the confidence to move the book series and the ADI forward.”