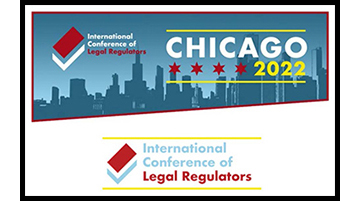 October 2022 — Professor Emerita Laurel S. Terry recently spoke at the 2022 annual meeting of the International Conference of Legal Regulators. She joined the CEO of the Law Society of British Columbia and the Deputy CEO of the Federation of Law Societies of Canada [FLSC] on a panel that addressed the topic of lawyer anti-moneylaundering education and compliance.

The International Conference of Legal Regulators or ICLR is a group that first met in London one decade ago. (Professor Terry spoke at the ICLR’s 2012 inaugural meeting). During the 2022 ICLR Annual Meeting, Professor Terry participated in an October 28th session entitled “Anti-Money Laundering Regulation — From Education to Compliance: Where Should the Balance Lie.” Professor Terry’s fellow panelists were Don Avison, who is the CEO of British Columbia’s lawyer regulatory body, and Frederica Wilson, who is Executive Director, Policy and Public Affairs, and Deputy CEO of the FLSC, which is the umbrella organization that brings together Canada’s lawyer regulatory bodies.

The panel noted that in many countries, lawyers are required to file suspicious transaction reports about their clients’ suspected money-laundering, but Canada and the United States have — to date — taken an approach that emphasizes education and other kinds of compliance measures. Law Society CEO Don Avison referred to British Columbia’s ongoing AML discussions and efforts, including the recently-issued Cullen Report. Ms. Wilson talked about the importance of the Canadian government-lawyer regulator AML Working Group, on which she serves, which was established after a decade of acrimonious litigation between the government and Canadian legal regulators. Ms. Wilson also pointed audience members to the FLSC’s anti-moneylaundering webpage, which sets forth the AML tools used by Canadian lawyer regulators.

Professor Terry’s remarks referred to the US AML situation, but also addressed the topic of lawyer AML education more broadly. Professor Terry noted that the United States has — so far — relied on a lawyer AML approach that combines education (see here and here), along with criminal statutes applicable to lawyers, and “front-end” rules of professional conduct, such as ABA Model Rules 1.1, 1.16(a)(1), and 1.2(d). (Rule 1.1 addresses competence and requires lawyers to know the relevant facts and law. Rule 1.16(a)(1) requires lawyers to reject representation (or withdraw) if the representation will result in a violation of law, such as money laundering laws. Rule 1.2(d) prohibits lawyers from knowingly assisting a client in illegal of fraudulent conduct.)

In addition to her slides, the ICLR conference materials included excerpts from one of Professor Terry’s AML law review articles and an AML resources list curated by Professor Terry.