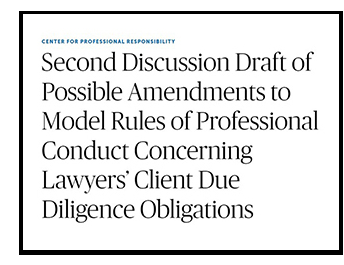 September 2022 — Professor Laurel S. Terry, who is the H. Laddie Montague Jr. Chair in Law and Professor of Law Emerita, recently provided a second set of oral and written comments to the American Bar Association regarding its efforts to develop a client due diligence ethics rule. Her comments addressed the June 28, 2022 Second Discussion Draft that proposed adding new language to Rule 1.2(d) of the ABA Model Rules of Professional Conduct.

Professor Terry’s written submission and oral comments noted that whatever the ABA did with respect to Rule 1.2(d), it was imperative that it add language to Rule 1.1 that explicitly stated that lawyers had a duty of competence, and thus a duty of inquiry, with respect to the exercise of their professional obligations. Professor Terry explained why the “if-then” structure and conditional nature of the Second Discussion Draft was insufficient. She explained that due diligence must not be conditional and that the obligation that speakers said was implicit in the ABA Model Rules of Professional Conduct should be made explicit.

Professor Terry’s written and oral remarks to the ABA drew upon expertise she developed as a result of her scholarship and service. Links to her AML scholarship and her AML-related service, including her service on the ABA Task Force on Gatekeeper Regulation and the Legal Profession, were previously documented here.