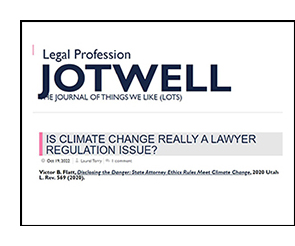 Professor Terry’s review began by noting that Professor Flatt’s article provides important perspectives for legal ethics scholars about the intersection of climate change and lawyer regulation. (Professor Flatt is primarily an environmental law scholar and serves as the Co-Director of the University of Houston Law Center’s Environment, Energy, and Natural Resources Center.) Professor Terry’s JOTWELL review praised Professor Flatt’s article for the clear way in which he applied his climate change expertise to lawyer confidentiality issues. She noted that his use of two hypotheticals grounded the article and made it accessible to all.

In order to answer the question posed in the title of her JOTWELL review, Professor Terry highlighted several lawyer regulation issues, beyond the confidentiality and disclosure issues that were the focus of Professor Flatt’s article. These include issues related to ABA Model Rule 1.1 on lawyer competence and the degree to which norms may be changing with respect to a lawyer’s accountability for client action. (See, e.g., Law Students for Climate Accountability, which has issued “scorecards” for law firms and has recommended boycotts).