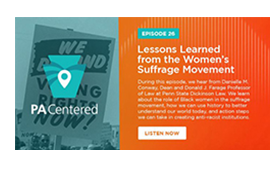 May 2021 — The Pennsylvania Coalition Against Rape recently hosted Dean Danielle Conway on its podcast that focused on the role of Black women in the Women’s Suffrage Movement. This PA Centered podcast was part of PCAR’s History You Should Know mini-series, which celebrates and highlights stories of people who advanced the anti-sexual violence movement, particularly Black women.