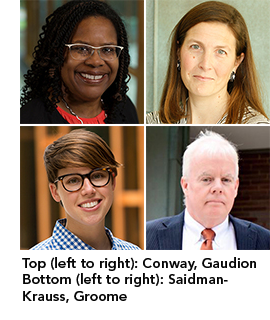 On Monday, April 12, which is the first day of the Symposium, Dean Conway will participate on a panel entitled The Role of Law School Deans. Dean Conway will join four of her sister deans to discuss the role of deans and administrators in leading an Antiracist law school Dean Conway’s presentation is based on her co-authored Rutgers article entitled Building an Antiracist Law School: Inclusivity in Admissions and Retention of Diverse Students—Leadership Determines DEI Success.

On Wednesday, April 14, Associate Deans Amy Gaudion and Bekah Saidman-Krauss as well as Professor Dermot Groome will present the content of three independently authored papers as part of a panel entitled Building an Antiracist Curriculum. Their papers and presentations focus on different aspects of building an antiracist law school, legal academy, and legal profession through leadership, vision priorities, and transformational diversity, equity, and inclusion-focused admissions:

These articles and presentations are part of a historic Symposium that seeks to address what an Antiracist legal education entails. The Symposium features five panels over two days; legal educators, law students, policy makers, and the public are encouraged to attend virtually and be part of this vital work. Advance registration is available here.

Professor Amy Gaudion is the associate dean for academic affairs and professor of lawyering skills at Penn State Dickinson Law. Her research and teaching interests focus on cybersecurity, national security law, and civilian-military relations. Her recent scholarship includes The Role of Satellites and Smart Devices: Data Surprises and Security, Privacy, and Regulatory Challenges, 123 Penn St. L. Rev. 591 (2019) (co-authored with Anne Toomey McKenna and Jenni L. Evans), as well as Defending Your Country . . . and Gender – Legal Challenges and Opportunities Confronting Women in the Military, a chapter in Women, Law and Culture: Conformity, Contradiction and Conflict (Jocelynne A. Scutt ed., 2016) (Palgrave Macmillan). Professor Gaudion leads the Law School’s national security and cybersecurity programs, and she established an annual cyberspace exercise in collaboration with the U.S. Army War College.