September 10, 2020 — In recognition of Constitution Day 2020, Dickinson Law is proud to participate in a variety of events on Thursday, September 17, as well as prior to and following this national day of commemorating the adoption of the U.S. Constitution.

“I consider it an honor to teach students about the power and promise of the law, and the lawyer’s obligation to defend the U.S. Constitution and promote the rule of law,” said Dean and Donald J. Farage Professor of Law Danielle M. Conway. “From virtual presentations to a freestanding exhibit at the Law School, there are many ways for our community members to engage with the U.S. Constitution and with one another.”

All members of the Dickinson Law community are invited to attend the following:

Constitution Week Interactive Webinar featuring Dean Conway
Sponsored by the School of Humanities and the School of Public Affairs at Penn State Harrisburg, Dean Conway will deliver remarks about the 19th Amendment and women’s suffrage followed by a Q&A session as part of an on interactive webinar on Tuesday, September 15, from 9:25 to 11:20 a.m. Penn State Harrisburg esteemed historian Dr. David Witwer, Professor of History and American Studies, will begin the webinar by presenting “The Messy Making of the Constitution.” Watch live on Zoom.

Constitution Day 2020: Civic Engagement and the 8th and 19th Amendments 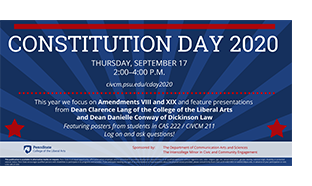 On Thursday, September 17, Penn State's Constitution Day 2020 will recognize the centennial of the 19th Amendment to the U.S. Constitution—while contributing to intersectional, anti-racist work—by focusing on civic engagement around issues related to the 8th Amendment. Sponsored by the College of Liberal Arts at Penn State, the event will be held online from 2 to 4 p.m. and will focus on Amendment VIII, which states: "Excessive bail shall not be required, nor excessive fines imposed, nor cruel and unusual punishments inflicted," and on Amendment XIX, which states: "The right of citizens of the United States to vote shall not be denied or abridged by the United States or by any state on account of sex." Watch prerecorded remarks from Dean Conway about women’s suffrage, the 19th Amendment, and the duality of a movement, including the intersections of the 8th and 19th amendments; view undergraduate student poster presentations; and learn more about civic engagement opportunities around the 8th Amendment.

“How to Be an Antiracist” Constitution Day Address by Dr. Ibram X. Kendi 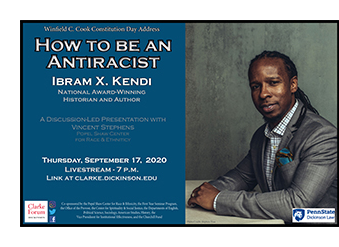 Dickinson College’s annual Winfield C. Cook Constitution Day address, sponsored by Dickinson Law and the Clarke Forum for Contemporary Issues, will be held at 7 p.m. on Thursday, September 17, via public You Tube livestream. Dr. Kendi, award-winning author of “How to Be an Anti-Racist,” which has spent 25 weeks on The New York Times bestsellers list, will discuss ways to understand, explain and solve the seemingly intractable problems of racial inequality and injustice. This event is open to the public, and the livestream link is available on the Clarke Forum website.

American Bar Association and Law Library of Congress 19th Amendment ExhibitIn addition to the virtual events, Dickinson Law is hosting the national traveling exhibit “100 Years after the 19th Amendment: Their Legacy, and Our Future,” which commemorates the centennial of the 19th Amendment, prohibiting the states from denying the right to vote to citizens on the basis of sex. The exhibit will be on display in Ridge Commons until October 10.  Please keep social distancing practices in mind when visiting the exhibit. 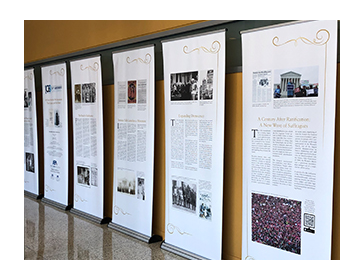 “Hosting this exhibit during this centennial celebration provides our community an exciting opportunity to reflect about the importance of exercising our right to vote,” said Associate Dean of Academic and Student Services Jeffrey A. Dodge. “It also reminds us that the journey to full civic participation in our society may have some bumps along the way, but eventually our Constitution and country find the right path.”