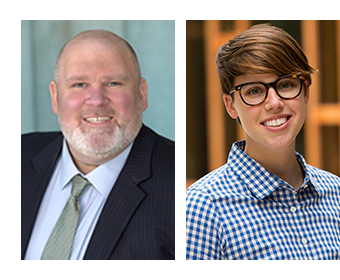 November 2020 — On November 7, 2020, Associate Deans Jeffrey A. Dodge and Bekah Saidman-Krauss served as the keynote speakers at Penn State’s Lead the Pride. Their keynote address was titled “Leadership and the First Amendment: Making Your Voice Heard.”  Their remarks introduced attendees to the legal framework of the First Amendment and its application to college campuses, events, and leadership.

Lead the Pride is an annual student leadership event that is organized by the Office of Student Activities and is open to students across the Commonwealth.  The day-long program focused on enhancing leadership skills and networking with other student leaders.

Associate Dean Jeffrey A. Dodge has spent over 15 years in legal education. Dean Dodge has broad experience overseeing law school and University-level offices of student services, international programs, admissions, academic success, career services, and more. He has taught and presented on topics in the fields of family law, international human rights, and comparative law. His scholarship focuses on the intersections of family law and inequity, and law school academic success and diversity. Dean Dodge is currently the vice chair of the Association of American Law Schools (AALS) Student Services Section. He previously served as chair of both the AALS Sexual Orientation and Gender Identity Issues and International Legal Exchange sections. Dean Dodge has served on the national diversity committee of the Law School Admissions Council Diversity Committee, as an American Bar Association accreditation site evaluator, and a two time director of the CLEO Pre-Law Summer Institute.