November 8, 2018 — It took more than five years after Ratko Mladic’s arrest for a judgment to be entered in the case of The Prosecutor v. Ratko Mladic, a case led by Dickinson Law Professor of Law Dermot Groome at the International Criminal Tribunal for the former Yugoslavia (ICTY) in The Hague. A former senior trial attorney at the Office of the Prosecutor for ICTY, Groome led the prosecution against Mladic as well as other notable ICTY cases including the Bosnia indictment against Slobodan Milosevic. 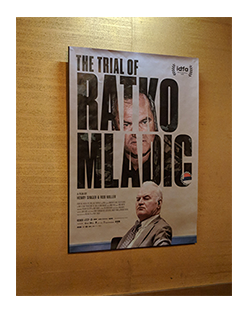 Almost exactly one year after Mladic received a life sentence for his conviction of the crimes of genocide, crimes against humanity and war crimes, the new documentary “The Trial of Ratko Mladic” made its world premiere at the International Documentary Film Festival Amsterdam (IDFA) on November 18, 2018. After attending the premiere and watching the film for the first time, Groome answered a series of questions.

Dickinson Law: What can you share about the case?
Professor Groome: The Prosecutor v. Ratko Mladic was the last trial held at the ICTY established by the UN Security Council in 1993 to hold senior political and military leaders accountable for international crimes committed during the break-up of Yugoslavia from 1991 to 1995. Mladic was the commander of the Army of Republika Srpska and was the most senior military official charged with crimes by the ICTY. He was convicted on November 22, 2017 of genocide, crimes against humanity and war crimes for the 1995 Srebrenica massacre of over 7,000 Muslim men and boys; for leading the nearly four-year siege of Sarajevo, in which thousands were killed; and for the ethnic cleansing of non-Serbs from large areas of Bosnia and Herzegovina. He was sentenced to life imprisonment.

Dickinson Law: How did you first become involved with the case?
Professor Groome: Mladic, after 16 years as a fugitive, was arrested in May 2011. Serge Brammertz, the chief prosecutor of the ICTY, asked me to lead the prosecution of the case against Mladic.

Dickinson Law: How did you meet the filmmakers and become involved with this project?
Professor Groome: After Mladic’s arrest, Henry Singer and Rob Miller—two well-known and well-respected documentary filmmakers—approached the tribunal with a proposal to follow the case and produce a documentary that would give viewers an inside look at the work of the different participants in the case: prosecution, defense and victims/witnesses. Singer is best known for his film “9/11: The Falling Man,” a documentary that sought to identify and tell the story of the man depicted jumping from the World Trade Center on September 11, 2001 and memorialized in an iconic photograph.

Dickinson Law: What was your role in the film?
Professor Groome: I appear in a number of scenes throughout the film: presenting the opening statement; conducting staff meetings; and working at the site of a mass grave in Tomasica, Bosnia.

Dickinson Law: Why did you agree to participate?
Professor Groome: I was initially reluctant to agree to the project. We deal with very traumatized victims and witnesses. I was very concerned about protecting these people from any additional unnecessary traumatization or doing anything that would make their experience of testifying any more difficult than it would be already.

I ultimately agreed to the project for two reasons. First, after several meetings with the filmmakers, I came to believe that they fully appreciated the sensitivities involved and could be trusted. We agreed that any filming would only occur after anyone depicted—including witnesses and staff—provided informed consent and could stop the filming anytime they chose. Now that I have seen the film, I believe my trust in Henry, Rob and all of their colleagues was well-placed. Their sensitivity to all witnesses—both prosecution and defense—is apparent throughout. Second, there are a lot of misconceptions about the work of international prosecutors. I thought this film could educate the public about the important responsibilities and work of international prosecutors and instill confidence in our work.

Dickinson Law: What was your reaction after seeing the film?
Professor Groome: I think it is a very well-made film. The filmmakers faced the impossible task of distilling several years of one of the largest international prosecutions in history—one with thousands of hours of court proceedings and more than 10,000 exhibits—into a 90-minute film. They successfully capture the essence of the trial and give the audience a unique insight into the work of the UN war crimes tribunal.

Dickinson Law: Will the film be screened elsewhere?
Professor Groome: After its debut at the IDFA, the film will be screened next week at Birzeit University in Palestine, where I will be attending a conference highlighting the legacy of the ICTY. The U.S. premiere of the film will be on March 19, 2019 on Frontline, the PBS documentary series. That week, I will be attending a conference at UConn School of Law to discuss the film. UConn is bringing together several witnesses and lawyers who worked on the case for the conference. I believe that the directors would be interested in screening the film at Penn State. 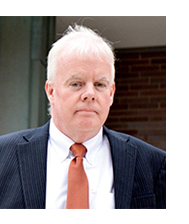 Groome has extensive prosecutorial, investigative and international experience. Prior to joining the Dickinson Law faculty, he spent more than 11 years as a senior prosecutor at the ICTY, where his work included a senior role in the Bosnian indictment against Slobodan Milošević, and the prosecution of Milan Lukić and Jovica Stanišić, the head of the State Security Service in Serbia. Groome is the author of the Handbook of Human Rights Investigation (2001, 2011), has appeared as an expert before the Human Rights Council and is a member of an expert group advising State Parties to the International Criminal Court. He most recently is tackling the problem of crimes against child soldiers and calling for a reconceptualization of how we approach the problem. He began his legal career as a prosecutor in Manhattan where he was a member of the Sex Crimes Unit.