It took more than a decade, but one of the first things the Clinic advocated for—waiving college tuition for foster children at Pennsylvania colleges—has finally come to fruition. 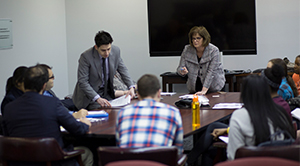 Professor Johnston-Walsh and her second- and third-year law students joined other organizations lobbying across the commonwealth to secure passage of the Fostering Independence Through Education Act. Governor Tom Wolf signed the bill into law on June 28.

The waivers begin in fall 2020 and apply to all public and private institutions in Pennsylvania, including community colleges. Students with a GED or high school diploma can use the waivers for five years or until they turn 26.

The Clinic advocated for passage of the law for 12 years, spurred by an early client’s case.

“We had a client who had really wanted to go to college, who was accepted to school but wasn’t able to afford the tuition,” Professor Johnston-Walsh says. “They had to change their career path because of it.”

The law students showed universities worried about costs that the tuition waivers would be limited. Estimates show fewer than 900 of Pennsylvania’s more than 25,000 children in foster care will qualify for the bill.

“Youth who age out of foster care often lack the financial and social support that many college-age youth take for granted and that they rely on to go to and get through college,” says Jennifer Pokempner, an attorney with the Juvenile Law Center in Philadelphia who worked on securing the bill's passage.

The current bill was introduced two years ago in the Pennsylvania legislature but failed to pass. Once room and board were removed from the waivers, it received enough support to reach Wolf’s desk.

“Given the importance of postsecondary education and training to adult success and self-sufficiency, this bill is an excellent investment in young adults,” Pokempner says.

Advocating for its passage offered an ideal focus for the Children’s Advocacy Clinic, which gives students real-world experience representing children in the legal system.

The Clinic reassured legislators and universities of the proposal’s fiscal feasibility. Students compiled research on similar legislation passed in other states, including Texas, Michigan, and California.

“We provided the data to them, and that made a big difference, so having the research law students did was helpful,” Professor Johnston-Walsh says.

The bill requires schools to create a “point of contact” to assist foster children with the financial aid process and locating support services on campus.

“Waiving tuition and providing points of contact who help youth connect with community- and campus-based resources will provide youth in foster care a meaningful opportunity to attend and thrive in college,” Pokempner says.

Penn State recently inaugurated a Fostering Lions Program (FLP) that will take on this duty.

“This is going to be a great opportunity for foster youth in PA. Financial aid is at the top of the list of what I assist current FLP students with,” says Cheri L. McConnell, education coordinator for Penn State’s Child Maltreatment Solutions Network and coach for the FLP.

McConnell says the university plans to hold a workshop in October, “Life After High School: Preparing Foster Youth for Success in College and Beyond,” to help foster kids learn about college and, she hopes, encourage them to apply to Penn State.

“When you have supportive resources like Fostering Lions within an institution, it makes college more attainable for foster children,” Professor Johnston-Walsh says.

The past few weeks, Professor Johnston-Walsh has been calling former students going back a dozen years to tell them about the passage of the law. “They can see that what they did actually worked,” she says. “I think it teaches them that you can’t make big changes quickly and not to give up. Perhaps you can work on something that can be done progressively, in steps. I’m so glad the voices of the kids were heard.”

Professor of Clinical Law Lucy Johnston-Walsh and her second- and third-year Children’s Advocacy Clinic law students joined other organizations lobbying across the commonwealth to secure passage of the Fostering Independence Through Education Act, which was signed into law by Governor Tom Wolf on June 28. The Children’s Advocacy Clinic was established in 2006 by Professor Johnston-Walsh. Under her supervision, second- and third-year law students advocate for policy addressing systemic issues in the legal system that impact children.