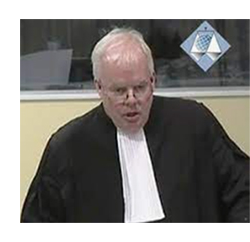 June 2021 — On June 8, 2021, the Appeals Chamber of the United Nations International Criminal Tribunal for the former Yugoslavia affirmed the trial judgment of General Ratko Mladić convicting him of inter alia Genocide and Crimes Against Humanity. Professor Dermot Groome led the prosecution of the trial. In addition to prosecuting General Mladić for the crime of Genocide, Groome also prosecuted the President of Serbia, Slobodan Milošević.

The Appeals Chamber dismissed all grounds of appeal asserted by the defense and affirmed the life sentence imposed by the Trial Chamber. The Appeals Chamber judgment can be found on the ICTY website. Professor Groome charged and prosecuted General Mladić for two counts of Genocide. The first, related to the ethnic cleansing campaign between 1992 and 1995 which resulted in the death of tens of thousands of Muslims. Groome alleged that this campaign was so severe in some places that it amounted to Genocide in some locations. Groome also charged Mladić with Genocide related to the murder of over 7,000 men and boys in Srebrenica in July 1995.

In 2019, PBS Frontline aired a documentary on the case. For more on the Appeal Judgment see BBC and CNN.