September 29, 2020 — When Tom VanKirk ‘70 attended Penn State Dickinson Law five decades ago, it was a time of tremendous unrest. The civil rights movement and protests against the Vietnam War were peaking, and VanKirk felt drawn to the field of law.

“I think the law has always been a great place to make a meaningful and lasting impact on society,” said VanKirk. 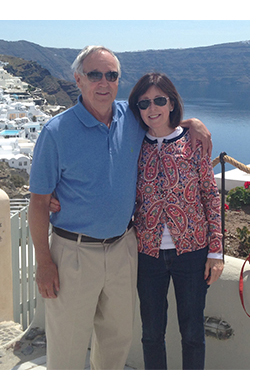 Now, all these years later, he still feels that way about the law. He will soon retire as executive vice president, chief legal officer, and secretary for Highmark Health at a time when he says we’re still having a difficult time as a nation. “Many of us have come to recognize that equality disparities persist, and only by providing education can we give young people the opportunity to make a difference and let their voices be heard,” said VanKirk.

VanKirk and his wife, Bonnie, want to help address that equality disparity. They have contributed $50,000, a gift matched by Highmark in honor of VanKirk’s retirement, to create the VanKirk/Highmark Educational Equity Scholarship at Dickinson Law. Those funds have been matched 1:1 through Penn State’s Educational Equity Matching Scholarship Program to create a total endowment of $200,000.

“I have been incredibly fortunate during my career to work with leaders and colleagues who recognize the importance of diversity and inclusion in the workplace and in society,” said VanKirk. “We are at a point in history, however, where action must replace words, and that is why Bonnie and I feel this scholarship will help to further this critically important dialog and to support progress. Within health care, you can feel it even more. Race is one of the social determinants of health, and the pandemic has affected minority groups more than it has any other group because of the different health disparities. We want to support getting more underrepresented students, in particular, involved in the educational process and in law.”

This marks the third major gift commitment the VanKirks have made during the University-wide “A Greater Penn State for 21st Century Excellence” campaign. Dickinson Law has set a goal of raising $16.4 million by June 30, 2022, and right now, that total sits at just over $10.7 million.

“This gift is a testament to the VanKirks’ and Highmark’s commitment to supporting a diverse and inclusive culture in higher education and the workplace,” said Dean and Donald J. Farage Professor of law Danielle M. Conway. “Dickinson Law is honored to be the beneficiary of their generosity, which expands financial resources for students who are historically underrepresented in law schools and in the legal profession.”

After joining the Leadership Council, VanKirk began reflecting on the opportunities he received from his education at Dickinson Law. VanKirk worked at Buchanan Ingersoll & Rooney PC, a Pittsburgh law firm, for 41 years, serving as chief executive officer from 2003 until 2009. He joined Highmark in March 2012.

“I have enjoyed it all. I’m so glad I went into law,” said VanKirk. “Dickinson Law supplied me with the education that enabled me to get a job with the Superior Court and then a large law firm. I didn’t think I’d ever properly given back to the school that provided me with so many opportunities, so when Penn State began offering the matching funds, my wife and I decided to commit $300,000 [to our first scholarship] and have Penn State match the money.”

VanKirk notes that in addition to learning how to think like a lawyer at Dickinson Law, he was taught that attorneys have an obligation to give back. He continues to believe that, too.

“Our lives would not be complete unless we gave to the community,” said VanKirk. “I really do hope others who graduated from Dickinson Law will think about helping other people attain the same kind of education that we did. The matching funds from the University enable alumni to help make a difference.”

The Educational Equity Matching Program offers alumni and friends the opportunity to partner with the University in creating a more diverse, equitable, and inclusive Penn State. Through June 30, 2022, or until the $10 million pool of matching support is expended, donors can multiply the impact of new scholarships for students whose gender, race, ethnic, cultural, and/or national background contribute to the diversity of the Penn State community. This support will help to fulfill Penn State’s historic land-grant mission—to reach all citizens of our Commonwealth through teaching, research, and service—and drive transformation across the institution and the larger world. Learn more at raise.psu.edu/EEMP.

This gift will advance "A Greater Penn State for 21st Century Excellence," a focused campaign that seeks to elevate Penn State’s position as a leading public university in a world defined by rapid change and global connections. With the support of alumni and friends, “A Greater Penn State” seeks to fulfill the three key imperatives of a 21st-century public university: keeping the doors to higher education open to hardworking students regardless of financial well-being; creating transformative experiences that go beyond the classroom; and impacting the world by fueling discovery, innovation and entrepreneurship. To learn more about “A Greater Penn State for 21st Century Excellence,” visit greaterpennstate.psu.edu.