From Sports to Torts G. Bryan Salzmann and James D. Hughes Stay Together

FROM SPORTS TO TORTS, G. BRYAN SALZMANN ‘91 AND JAMES D. HUGHES ’90 STAY TOGETHER 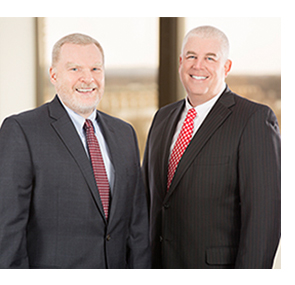 Hughes, who golfed professionally for a brief period before pursuing his law degree, and Salzmann, who played basketball at the University of Scranton, were two of the premier athletes to enter Penn State Dickinson Law in the early ‘90s. When someone at the Law School invited them both on a golf outing, things turned competitive.

“It got a little heated,” Salzmann admits.

During that first day on the links, and in subsequent softball games at the school, the men recognized things they admired in the other, things they could identify with — tenacity, fire, and drive. Salzmann and Hughes became tight as they finished law school, and nearly three decades later, they remain best friends. They have even turned their partnership into Salzmann Hughes, P.C., a law firm with five offices across Central Pennsylvania.

Hughes comes from a family of lawyers, and he jokes that he knew fairly quickly that pro golf would not be his ticket in life. “I realized if I was going to miss that many putts, I’d starve, so I had to come up with another profession,” he says. “The Law School appealed to me because I knew I’d be able to get involved in a lot of the activities they had to offer, and it was one of the oldest in the country.” (The Hughes golf dream lives on, though — Hughes’ son, J.D., played at Penn State before recently turning pro.)

Basketball players love stats, so it’s little surprise Salzmann was drawn to Dickinson Law by an impressive one. While applying, he noted the school had a nearly 100 percent passing rate for the bar during the three previous years. “If I was going to make an investment by putting myself through law school, I wanted to go somewhere I felt I’d be able to practice immediately once I finished,” he says.

The two men loved the Carlisle area, including the ample outdoor space for two of their shared passions, fishing and hunting. They stayed nearby after graduation, each working for other firms before establishing their own.

Today, they maintain close ties to the Law School, including sponsoring the Salzmann Hughes Scholarship at Dickinson Law with their firm colleagues.

“It’s a unique place,” Salzmann says. “I’m so thankful for my education. That’s one of the reasons we felt it was important to give back. Our success ties back to how well we were prepared. The things we were taught include not just the law but the service side of it.”

Salzmann Hughes, P.C., actively pursues Dickinson Law grads. At least 10 are on its current staff as well as two interns.

“We’ve maintained a close relationship with former Dean [Gary S.] Gildin,” says Hughes. “We’ve watched Dickinson Law grow and change over the years, and it’s always been a special place. We enjoyed our years at the Law School together.”

Both men appreciated the expertise of their Dickinson Law professors and have gone on to teach themselves. With specialization in commercial and residential real estate as well as municipal matters and estates, Hughes has taught classes at what’s now Central Pennsylvania College. He also belongs to the Real Property, Probate and Trust Section of the Pennsylvania Bar Association.

Hughes and Salzmann take meetings together today, but they also put aside time to spend outdoors. Their offices display mementos from past hunting trips, including ducks and startlingly large big-game trophies.

Along with their wives, they both raised their families in the area. Between them, they have 10 kids.

“We’ve built a special practice here, it’s not like other ones you’ll find. We don’t work on weekends — we work hard the rest of the week, but we believe everyone should spend time with their family,” Salzmann says.

They’ve never stopped learning, whether it’s about zoning ordinances, land use regulations, or faith — Salzmann is currently studying to become a deacon. And they maintain the team-first attitude that made them standout athletes.

“We don’t have a hierarchical structure here,” says Hughes. “We all work here. If we see the garbage overflowing, we empty it. We try to set an example so others see that. We’re trying.”

And, it seems, succeeding.