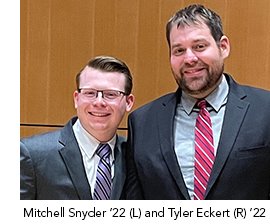 This event, sponsored by the New York City Bar Association’s National Moot Court Competition Committee and the American College of Trial Lawyers, is one of the longest-running and most honored competitions of its kind. The historic competition allows student advocates to hone their appellate advocacy skills before prominent members of the legal profession. Every year, over 120 law schools compete in regional rounds throughout the United States, with winners advancing to final rounds at the New York City Bar Association.

“It was an exhilarating experience to argue before, and have a conversation with, sitting U.S. Circuit Court Judges. Their questions and insight into the issues we were arguing was extremely impressive. I am proud we were able to engage in a dialogue with them regarding the important issues at play in the case,” said Snyder. “I found it was rewarding to put to use the skills gained in both the Advocacy I and Appellate Advocacy courses throughout the competition. My externship experience with the U.S. Attorney’s Office, U.S. District Court Judge Joseph Leeson Jr., and the Appellate Division of the Cumberland County District Attorney’s Office provided me with the practical experience necessary to successfully craft my argument.”

As a member of the 2021-22 Moot Court Executive Board, Eckert indicated that “this year, the executive board set out to expand and improve the moot court opportunities by expanding competition opportunities to 2Ls. We sought to ensure that our competitors could gain valuable experience in brief writing and oral argument beyond the intraschool competition held each fall. With the leadership of Moot Court President Michaela Zanis, I believe we can leave a legacy of a Moot Court program that will provide more opportunities in the future. I’d like to thank all the professors who helped us prepare for this competition and are partly responsible for our success. Special thanks to our Moot Court Program faculty advisor Mohamed Badissy, National Moot Court Team coach Robert Rains, Gary Gildin, Timothy Nieman, Thomas Place, and the Moot Court Executive Board.”

Professor Emeritus Robert E. Rains, who served as the coach for the team, noted, “This is a long-established, prominent national competition. It is a real accomplishment for Mitch and Tyler to have been awarded the highest score in the region on their brief and to have won the region, especially with a 4-0 record. Mitch and Tyler did an outstanding job.”

Under the rules, the top two teams in each region proceed to the final rounds, meaning Snyder and Eckert will represent Dickinson Law in the national final rounds to be held January 31 through February 3, 2022 in New York City.