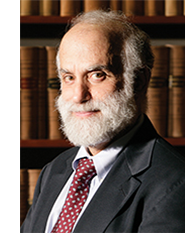 October 2020 — For a number of years, Emeritus Professor of Law Robert Rains has been concerned about the delays in the federal court handling of international child abduction cases. “Although several justices of the U.S. Supreme Court have noted the undue delays, causing great harm to those children and their parents as well, neither Congress nor our federal judicial system have taken steps to ameliorate this situation,” said Rains. “Many state rules of court are designed to ensure the prompt disposition of cases involving children, so models are already in place that the federal system could adapt to its own use. As a result of our delays, sometimes children and a parent don’t see each other for years. All this despite our treaty obligation to effect the prompt return of children who have been wrongfully abducted to or wrongfully retained in the U.S.” In The Federal Lawyer magazine cover story, Rains advocates for amending the International Child Abduction Remedies Act to prioritize these cases and to create special rules of federal civil procedure to “fast-track” them. Full story