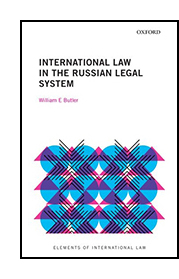 March 2021 — Professor William E. Butler discussed his book, International Law in the Russian Legal System, during a virtual book talk on March 19 hosted by the George F. Kennan Institute. Professor Butler's book, commissioned and published by the Oxford University Press (OUP) in late fall 2020, is the second volume in the OUP’s newly established series on the Elements of International Law.

The Kennan Institute is the premier U.S. center for advanced research on Russia and Eurasia and the oldest and largest regional program at the Woodrow Wilson International Center for Scholars. Professor Butler was a George F. Kennan Fellow in Spring 2019, where he completed much of the research for the book and is the John Edward Fowler Distinguished Professor of Law at Penn State Dickinson Law.