January 26, 2021 — Dusty Elias Kirk, a 1979 graduate of Dickinson Law, was the first person in her family to go to law school as well as the first in her family to attend college. She is a successful real estate attorney and partner at Reed Smith in Pittsburgh; a member of the Executive Council of the Pennsylvania Bar Association, Women in the Profession Committee; and a member of the Dickinson Law Leadership Council Advisory Board and avid alumni volunteer for Penn State Dickinson Law, among her many positions. 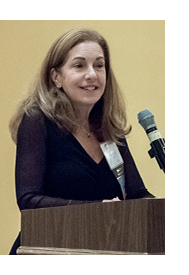 Her accomplishments are possible, she said, thanks to the foundation laid at Dickinson Law.

“I do not think I would have had the career that I do now if I had not attended Dickinson Law,” said Kirk.

As a way to show her appreciation for that education, Kirk recently made a $250,000 estate commitment that will increase her existing Dusty Elias Kirk ’79 and William R. Caroselli ’66 Scholarship at Dickinson Law. Kirk created the scholarship through the Graduate Scholarship Matching Program, which provided a 1:1 match for her original $125,000 gift.

“Dusty Elias Kirk’s estate gift reflects her stalwart commitment to Dickinson Law, and it demonstrates her resolve to enhance the teaching and learning that we do in service to the rule of law, the legal profession, and our society,” said Dean and Donald J. Farage Professor of Law Danielle M. Conway. “We are grateful for and appreciative of her longstanding support, and we are confident that her philanthropy will inspire new and existing donors to invest in the next generation of Dickinson Law lawyer leaders.”

Kirk’s husband, Caroselli, who died in 2018, also attended Dickinson Law and graduated in 1966. “He really revered Dickinson Law as giving him his career, and so do I,” said Kirk. “I thought a lot about it, and I thought between my husband and myself, he would agree with my decision to make an estate commitment.”

Increasing the impact through legacy giving

Kirk chose legacy giving for several reasons. She appreciates the flexibility of making an estate commitment, which allows donors to adjust the terms if their means change over time.

“I have already put that money aside, and it is not something I have to keep thinking about for the future,” said Kirk. “My kids will be glad. It is a decision they do not have to make because they know exactly what I want to do with that money. If you have the means and ability to do it, I think it is an easy way to make a gift.”

As Dickinson Law’s volunteer campaign chair, Kirk sees firsthand the importance of planned gifts and hopes other alumni will be inspired to consider their own legacy at Dickinson Law. She has helped lead a campaign that has raised more than $11.4 million toward a $16,400,000 goal. Planned gifts often represent approximately 30 percent of campaign totals and will be critical to a successful campaign for the Law School. Dickinson Law’s fundraising goal is part of a University-wide campaign, “A Greater Penn State for 21st Century Excellence,” to raise a cumulative $2.1 billion.

Kirk sees volunteering her time to help lead fundraising efforts as another way to give back to Dickinson Law.

“If we do not have the money, we cannot get those great students who may not have the resources to pay for law school but who will be good lawyers. Then you are losing out not only at the Law School but also as a society,” said Kirk.

Giving others a great opportunity

First preference for Kirk’s scholarship goes to adult learners, defined as those returning to school after at least four years of employment, after assuming roles such as parent or spouse, or after serving in the military. “I worked for one year and then went back to law school, and even that one year of experience had a big impact on me,” said Kirk. “It is really important to have people who have life experience go back to law school.”

When Kirk remembers her time at Dickinson Law, she appreciates the instruction she received as well as the unique environment of the close-knit community. “It taught me to think so analytically and creatively at the same time about how you solve legal problems,” said Kirk. “I made such wonderful friends, and we are still in contact. They remain some of my best friends, no matter where we live.”

She remembers how close her class was to the dean and their professors, including Professor of Law Emerita Christine Kellett. “I remember she would have us look at the cases and United States Constitution and have us think about how you should make your arguments,” said Kirk.

Robert Woodside, a judge who taught at Dickinson Law, imparted advice to Kirk’s class that she continues to pass on to her own associates. “He told us always to do the thing we dread the most first each day, just to get it off our desks. Even if it is just something administrative, like telling a client they do not have a case,” said Kirk. “Forty years later, I tell that to my associates.”

Donors who will be 60 years of age or older by the end of the current campaign (June 30, 2022) can document planned gifts—to include bequests through a will or trust or beneficiary designations on a retirement plan or life insurance policy—to count toward Dickinson Law’s campaign totals. Planned gifts are revocable and can be revised should the donor’s circumstances change. For more information on planned gift opportunities and to ensure bequests are structured to achieve maximum impact, interested individuals should visit pennstate.planmygift.org or contact Kelly Rimmer, director of development and alumni affairs, at krimmer@psu.edu.

Kirk’s commitment will advance "A Greater Penn State for 21st Century Excellence," a focused campaign that seeks to elevate Penn State’s position as a leading public university in a world defined by rapid change and global connections. With the support of alumni and friends, “A Greater Penn State” seeks to fulfill the three key imperatives of a 21st-century public university: keeping the doors to higher education open to hardworking students regardless of financial well-being; creating transformative experiences that go beyond the classroom; and impacting the world by serving communities and fueling discovery, innovation, and entrepreneurship. To learn more about “A Greater Penn State for 21st Century Excellence,” visit greaterpennstate.psu.edu.