March 2021 — Benjamin Folkman met Stephen Busterna on their first day as undergraduates at Dickinson College. Both members of the class of 1982, they studied abroad together in Italy during their junior years and decided to attend Penn State Dickinson Law together, where they joined the same study group and took another trip to Italy.

Dickinson Law played a determinative role in Busterna’s life. He met his wife, Jacqueline “Jackie” Busterna, a 1996 graduate, through the Law School and maintained ties to Carlisle long after leaving the area.

Folkman and Busterna’s relationship also remained strong. After Busterna retired from a job with the Commonwealth, he became Of Counsel to Folkman’s firm, Folkman Law Offices, P.C.

When Busterna passed away unexpectedly in the summer of 2016, Folkman wanted to find a way to honor his late friend. He recently signed a pledge to endow the Folkman Busterna Scholarship at Dickinson Law.

“Steve was a good buddy of mine, and I felt it was important to have a link between him and me. That is why I named it that way,” said Folkman. “He was always the life of the party.”

Folkman originally created an annually funded scholarship, but after witnessing its impact on student recipients, he decided to make a more significant and sustaining impact on Dickinson Law. He increased his commitment to endow a $50,000 scholarship, which will provide enduring support for generations of Dickinson Law students who demonstrate financial need and high academic performance.

“Before I did it, I reached out to Jackie, and she was floored,” said Folkman. “I told her it was my pleasure to do this. When I get letters from the students who have received this stipend, I forward them to Jackie, and she is thrilled.”

“It is the highest honor that Steve could ever have had from a friend,” said Jackie Busterna. “Dickinson Law was how Steve and I met, so there is no better way to commemorate him.”

Folkman said he and Steve enjoyed learning a new way of thinking during their law school years. They treasured the close relationships they formed with their class.

“There is a certain bond we have amongst our classmates,” said Folkman. “There are some people I have lost touch with, but I can call them up even though I have not seen them in decades and have a great conversation. We had these connections, and no matter what, you can contact them when you need help.”

He believes supporting the next generation of lawyers at Dickinson Law is critical to the profession. “Tuition itself does not pay for everything,” he notes. “I think some students are excellent academically, but they cannot afford to pay the full tuition. This scholarship can help them.” 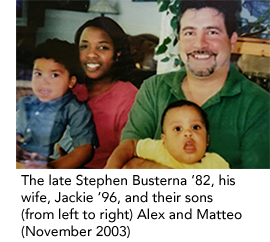 When his friends and family talk about Steve, they describe a man who was always up for a good time, a devoted father and husband proud of his Italian heritage. He loved to cook. Jackie remembers friends from the LL.M. program at Dickinson Law coming to their house for a homecooked Italian meal.

Steve practiced contract law, working within transportation as an assistant legal counsel for the Commonwealth of Pennsylvania. Following his retirement, Steve taught art history at Messiah College, a passion developed in part from his trips to Italy during college and law school, and later with Jackie.

He also devoted time to his family, including his sons with Jackie and a son from a previous marriage. While Jackie worked full time and traveled for her job, Steve cared for their two boys.

“He was always the soccer coach. He would bring the boys to their games and practices. He loved all that,” said Jackie. Both sons wrote about the profound influence their father had on them for their college entrance essays, recounting how he encouraged them to volunteer and supported their academic aspirations.

“If it were not for Dickinson Law, we would not have had our family. The scholarship is the highest honor Steve could be given to keep his name going,” said Jackie.

“It is an important thing to me. It is a legacy, a permanent connection between Steve and me,” said Folkman.

Friends and classmates who wish to honor Steve’s memory with gifts to the Folkman Busterna Scholarship can contact Kelly Rimmer, director of development and alumni affairs, at krimmer@psu.edu. Additional gifts to the scholarship fund will increase available resources and enhance the impact on student beneficiaries.

Folkman’s commitment will advance “A Greater Penn State for 21st Century Excellence,” a focused campaign that seeks to elevate Penn State’s position as a leading public university in a world defined by rapid change and global connections. With the support of alumni and friends, “A Greater Penn State” seeks to fulfill the three key imperatives of a 21st-century public university: keeping the doors to higher education open to hardworking students regardless of financial well-being; creating transformative experiences that go beyond the classroom; and impacting the world by serving communities and fueling discovery, innovation, and entrepreneurship. To learn more about “A Greater Penn State for 21st Century Excellence,” visit greaterpennstate.psu.edu.