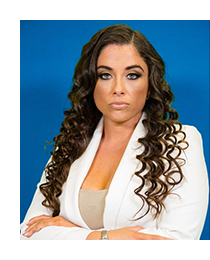 March 3, 2021 — Jasmine Rand, attorney to the Trayvon Martin and Michael Brown families and international legal and media strategist for the George Floyd legal team, will share her insight, experience and pioneering efforts for social justice during a virtual talk titled “Oppression of Equality: Being the Only Woman in the Room” on Monday, March 8, from 12:30 to 1:30 p.m. EST. Hosted by Dickinson Law, the event is open to the University community; click here to register.

Rand is the founding attorney of Rand Law, LLC, a Miami-based civil litigation firm. A successful civil rights attorney, professor and businesswoman, she has fought for the rights of others who faced discrimination based on race or gender. On a personal level, Rand has had to fight against inequalities in the business world and has found that as she becomes more successful, she is surrounded by fewer women. The challenges she faced in breaking the glass ceiling in a predominantly male-dominated field are not that dissimilar to the challenges women across the country face.

During her talk, Rand will inspire confidence with her own story and leave attendees with a sense of empowerment for their own sense of identity. She will discuss being the “only woman in the room,” a place she found herself in many times as a young, successful female attorney, and will focus on the experience of a woman “once she gets in the room.” According to Rand, to be successful, the expectation is that women somehow must part with their femininity, dressing in business suits to compete in a male-dominated field, or that discussing motherhood might be perceived as less ambitious and not committed to a career in business. She will also discuss why, if true equality exists, so many women are parting with their core identity to prove they are serious about their career.