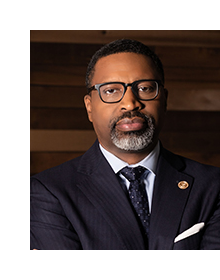 February 22, 2021 — In recognition of Black History Month, Dickinson Law is proud to host Derrick Johnson, president and chief executive officer of the National Association for the Advancement of Colored People (NAACP), as its keynote speaker. Johnson will deliver his remarks, titled “Make Black History Month All Year Long,” on Zoom Thursday, February 25, from 1 to 2 p.m. Time will be allocated for Q&A following his keynote address. Co-sponsored by Dickinson Law’s Black Law Students Association and Office of Academic and Student Services, this event is open to the University community. Register here.

Under Johnson’s leadership, the NAACP has undertaken such efforts as the 2018 “Log Out” Facebook Campaign, pressuring Facebook after reports of Russian hackers targeting African Americans; the Jamestown to Jamestown Partnership, marking the 400th year enslaved Africans first touched the shores of America; the 2020 We are Done Dying Campaign, exposing the inequities embedded into the American healthcare system and the country at large; and most recently the victorious 2020 Supreme Court lawsuit NAACP vs. Trump.

Johnson also continues to be on the frontlines on some of the most pressing civil rights issues of our time, calling out Virginia Governor Ralph Northam for his use of Blackface, condemning the burning of Black churches in Tennessee and Louisiana, testifying before the Senate Judiciary Committee in opposition to Attorney General William Barr’s nomination, and overseeing the NAACP’s vote to impeach President Donald J. Trump at the 110th National Convention in Detroit.

Johnson attended Tougaloo College in Jackson, MS and earned his JD from the South Texas College of Law in Houston, TX. He completed fellowships with the Congressional Black Caucus Foundation, the George Washington University School of Political Management, and the Massachusetts Institute of Technology. He has served as an annual guest lecturer at Harvard Law School and as an adjunct professor at Tougaloo College.