May 11, 2019 — First U.S. Secretary of Homeland Security and Pennsylvania’s 43rd Governor Thomas J. Ridge ’72 told graduates of the class of 2019 that being a lawyer will be the most difficult, heart-wrenching, at times even perilous professional work of their lives during his commencement address on Saturday, May 11, 2019, at the Anita Tuvin Schlechter Auditorium, Dickinson College, Carlisle. 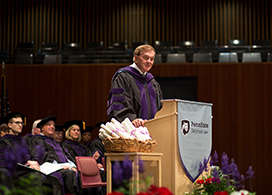 “And if that is the case, then it will be the most adventurous, consequential and fulfilling work as well,” said Ridge, who recalled sitting among his fellow graduates donning a cap and gown forty-seven years ago at his own commencement ceremony. “I didn’t know much about what was next for me. I didn’t know much about myself. Although I had learned a few things along the way.”

After graduating from Harvard University with honors, Ridge spent one year at the Law School before getting drafted into the U.S. Army, where he earned a Bronze Star for Valor, the Combat Infantry Badge, and the Vietnamese Cross of Gallantry for his service as an infantry staff sergeant in Vietnam. Upon earning his juris doctor (J.D.), Ridge practiced law both privately and as an assistant district attorney.

“We thought very hard about the most appropriate person to deliver the commencement address on this historic 185th anniversary of the founding of the law school,” said Dean and Professor of Law Gary S. Gildin. “The choice was easy and obvious. Gov. Ridge is the embodiment of the ‘Dickinson Way,’ which invites our graduates to use the privilege of their degree as servants of their clients and their communities rather than for personal entitlement to fulfill our mission of Practice Greatness.”

Ridge was one of the first Vietnam combat veterans elected to Congress and spent six terms in the U.S. House of Representatives. He was twice elected governor of Pennsylvania, leaving midway through his second term to become the assistant to U.S. President George W. Bush for homeland defense, and later became the first secretary of the U.S. Department of Homeland Security. Ridge currently serves as the chairman of Ridge Global, L.L.C. and Ridge Global Cybersecurity Institute, as partner at the Ridge Policy Group, and sits on other public and private boards.

“Your mission, in my opinion, is more complicated and demanding today than ever before given the social and political environment within which we all live and work,” said Ridge. “As a defender of the rule of law, you will always have standing in the court of public opinion, and so I urge you to speak out when appropriate. No, more than that, I urge you to speak out even when it doesn’t seem appropriate at all.”

Ridge told the graduates they have the tools of a premier education. “You know rightness and wrongness, but now you must have the courage of your convictions to do what’s right and to face the blowback that comes with that. To say, in those uncomfortable, sometimes unpopular, sometimes lonely moments, this isn’t the law. This isn’t right. This isn’t who we are.”

“I wish all of you great material success, and I believe you will find it," said Ridge. "But I also wish you true fulfillment. Through a life in service to a cause greater than self. By taking your education, experience and judgement and making it available to others. You have chosen a profession that is designed to make a difference in the lives of others. So go for it. Take a stand. Fight for the ideals and character of a free people. Fight for justice and opportunity for all. Stand up for each other. Stand up for yourself. Stand up for what’s right. Stand up and fight.”

Prior to attending Dickinson Law, Khalid worked for three years as an associate at a full-service law firm in Islamabad, Pakistan. She came to the U.S. with no financial support from family or friends. “I made my choice, and I took a risk to pursue my dream of earning a U.S. LL.M.”

Khalid shared that Dickinson Law gave her an opportunity to achieve what seemed impossible to achieve in her home country. “This LL.M. program has been highly challenging, has polished my professional skills, and has given me an opportunity to learn about American culture. Now that I am graduating with my LL.M., I look forward to moving on to even bigger rebellions that do not only benefit me alone, but also those who are disadvantaged or persecuted.”

Kraus, who was selected by his peers as the Lee Popp Award recipient for his excellence in service, extracurricular activities and devotion to the class, encouraged his classmates to remember the lessons they taught each other along the way when the finer points of doctrine have been forgotten. “Dickinson Law has instilled us with the values of the legal profession. We commemorate that today, then carry those values into the world, ever mindful of our power to do good, and ever grateful for the vast horizons of goodwill from which that power derives. Remember why you came to law school, remember your training, and give thanks for what you will take from here—your hard-won knowledge of the world and the mantle juris doctor.”

Proudly representing the class of 2019 as its student speaker, Slobom reminded his classmates that 997 days ago, they became part of a vibrant, caring, and supportive community. “We came from diverse backgrounds, some of which today’s society believes should prevent us from getting along, and we arrived at a particularly strange time. While our professors were teaching us to live in the gray areas of the law, society was trying to convince us to view everything as black or white. Like the thousands of Dickinson Law graduates that came before us, we were forced to confront our own beliefs in the process of learning to ‘think like a lawyer.’ We learned from one another and occasionally, we changed each other’s minds. We learned to think through nuance, to get to the heart of debates with razor-thin precision, to disassociate the opinion we might find objectionable from the person espousing it. And we did so against a social backdrop that disfavors nuance and places binary thinking on a pedestal. I think all of this goes to say that we as students—and now alumni—of Dickinson Law, like those who have come before us, have chosen to hold ourselves to a higher standard.”

Slobom urged his classmates to “never forget your time here; continue seeing the nuance; remain willing to change your minds; think beyond the parameters of right and wrong or right and left; continue recognizing the ones who go unrecognized; and continue holding yourselves to that heightened standard of integrity that we have held ourselves to over the last three years.”

The commencement ceremony was Gildin’s last as dean. His six-year deanship concludes June 30, 2019.

“As meaningful as the deanship may have been to the institution, I greatly look forward to returning as a member of the full-time faculty, teaching and more directly working with students,” said Gildin.

Gildin congratulated the class of 2019 on their successful completion of the demands and rigor of law school. “Use the privilege of your law degree to follow something you’re passionate about in a way that will impact your community in a positive way. As lawyers, you are going to enjoy a unique opportunity to contribute to justice and to the social good.”

Members of the class of 2019 will launch their legal careers in a wide range of employment settings throughout the country. Several will clerk for state court judges; serve in government jobs, including U.S. Army Judge Advocate General appointments and District Attorneys’ offices; and work in large, regional, boutique and small law firms; in public interest; and in business and industry.

“You have chosen a profession that is designed to make a difference in the lives of others,” said First U.S. Secretary of Homeland Security and Pennsylvania’s 43rd Governor Thomas J. Ridge ’72 during his commencement address on Saturday, May 11, at the Anita Tuvin Schlechter Auditorium, Dickinson College.