Dickinson Law Leadership Council member Christine Hurst Perrucci ’94 and her husband, Michael, recently made a $50,000 commitment to establish the Christine Hurst Perrucci ’94 and Michael Perrucci Scholarship at Penn State Dickinson Law. Motivated by a desire to give back and to recognize the impact of their individual legal education, the Perruccis created the endowed scholarship with general awarding criteria to provide the Law School with flexibility in directing the scholarship to students in need. 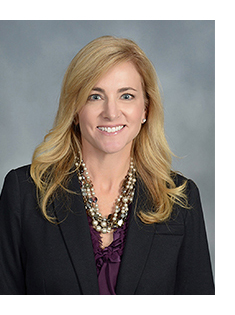 “Law school was an economic challenge for both my husband and me, so we are happy to be able to provide some financial assistance to a Dickinson Law student,” Christine says.

Christine says the donation also serves to teach the couple’s two teenage children about the responsibility of giving back. “We have always tried to instill in our children the importance of philanthropy, and that when you are able, you contribute in meaningful ways; it reflects our values.”

Christine sees the scholarship as a “thank you” to an institution she respects and appreciates. She treasures the memories from that time and can still name all her professors from her years at Dickinson Law, including Emeritus Dean Gary S. Gildin. “Dickinson Law helped me, so if I can pay it back and help someone else, that’s wonderful. I really believe in the institution, and I’m very excited about the changes that have been made with the new curriculum and direction of the Law School,” Christine says.

She believes students graduating with the hands-on experience they gain from the updated curriculum are “ahead of the game”.

During her own law school years, Christine valued the small size of her classes. She appreciated walking down the hall and knowing everyone’s name, including her professors and members of the administration. “You weren’t just a number, you were a name,” she says. “It felt like you were part of a family. It was a close-knit community then and remains that way today.”

Christine didn’t initially plan to go to law school. She graduated from Kutztown University with a degree in psychology and wanted to pursue a doctorate in the field. However, on the suggestion of an attorney friend and Dickinson Law alum, she decided to take the LSAT and apply to law school. Christine says, “Going to law school, and choosing Dickinson Law was the best thing I did."

She applied to several law schools in Pennsylvania, and Dickinson Law was her top choice. She was impressed by Dickinson Law students’ outstanding rate of passage for the bar exam. “At the time, it was the highest for any law school in the state. I felt I could receive the best education at Dickinson Law and still very much believe I did. I’m honored to remain involved with the school,” she says.

Christine took classes that helped pave her career path. During her third year, she began working with the Family Law Clinic which allowed her to go to court with a licensed attorney as a sponsor. “It was valuable experience that helped prepare me to practice," Christine says.

She went straight from law school into practicing family law. Eventually, she joined her husband’s firm, Florio & Perrucci, P.C. (now Florio Perrucci Steinhardt Cappelli Tipton & Taylor), focusing on civil litigation. Christine stopped practicing full time when her first child was born, and now remains Of Counsel at the firm, which has offices in Pennsylvania, New Jersey, and New York. In addition to being a member of the Leadership Council, Christine serves on the board of Moravian Academy in Bethlehem as well as volunteers for other local organizations where she applies her legal education every day.