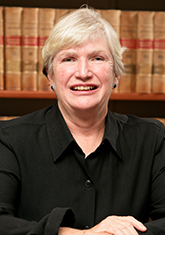 A member of the faculty since 1976, Professor Christine Kellett retired from the Law School at the end of the 2003-2004 academic year. Over the span of her 30 years at Dickinson, she taught many courses including Civil Rights, Comparative Law, Civil Procedure, Arbitration, Appellate Court and International Agricultural Law. However, constitutional law, together with state and local government and the U.S. Supreme Court, were her primary focus. From 1996 until 1998 she served as associate dean for institutional planning and joint degree programs. Additionally, she served as the director of Agricultural Law Resource and Reference Center from 1997 until 2003 making numerous presentations to academic and professional groups throughout Pennsylvania and the United States.

In 2002 Professor Kellett received The Dickinson School of Law General Alumni Association’s Career Achievement Award, and in the spring of 2004, she was bestowed the Sylvia H. Rambo Award by the Women’s Law Caucus of the Law School.