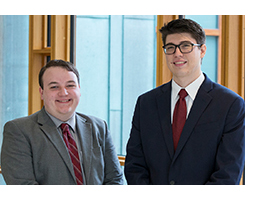 They defeated fellow second-year law students Aaron Gallagher and Stephen Speer in the championship round, which was judged by United States Magistrate Judge of the Middle District of Pennsylvania Karoline Mehalchick; Pennsylvania Superior Court Judge Victor P. Stabile (class of 1982); and David Fitzsimons (class of 1984), attorney with Martson Law and practitioner instructor at Dickinson Law.

“This is one of the greatest things I have ever achieved,” said Ciarlante. “The fact that other people recognize me as a strong advocate means a lot and proves to me that I made the right choice to go to law school.”

Hosted by Dickinson Law’s Moot Court Board, the annual competition — named after Triston “Chase” O’Savio (class of 2018) for starting the event during his third year of law school — is open to second- and third-year law students and provides junior advocates the practice, training and resources needed to succeed in competitions each spring.

Through the semifinal round, both teams represented the plaintiff. Because Gallagher and Speer were seeded higher at the end of that round, they chose to continue as petitioner, while Ciarlante and Grunloh had to prepare new arguments as respondent.

“I think we were slightly panicked going into the final round,” said Ciarlante. “We didn’t have the ability to meet with our coach to discuss new strategies or practice our arguments.”

As the law school’s top appellate advocates, Ciarlante and Grunloh were awarded the Christian R. Burne ’17 Award. Speer received the Francesca M. Kester ‘17 Most Valuable Oralist Award. Both awards were established by the 2018 Moot Court Board in recognition of the excellence in advocacy and leadership that Burne and Kester demonstrated during their time as law students at Dickinson Law.

“I am honored to have been chosen as the best oralist of the competition; however, I thought everyone involved could have earned this recognition,” said Speer. “We have so much talent in our class, and I’m incredibly flattered that on this particular day, I was chosen.”

Speer said that he was thrilled to be able to argue in front of an impressive panel.

“I know I was certainly nervous,” said Speer. “Judge Stabile put us at ease by walking us through the procedure. My partner Aaron and I argued the best we ever had during the competition, and I am exceptionally proud of our performance.”

Both Ciarlante and Grunloh want to be criminal court litigators, so the opportunity to argue before an actual judge allowed them to practice what they hope to do after graduation.

“We learned both form and substance while trying to develop clever ways of presenting our arguments and parrying questions from the judge,” said Ciarlante. “Even if we hadn’t advanced to the championship round, this experience would have been invaluable.”