April 24, 2019 — For the third year, Dickinson Law students, family and friends gathered inside the Apfelbaum Family Courtroom and Auditorium to celebrate their heritage, unity and academic achievements, as well as those who supported them throughout their educational journey, during the annual Donning of the Kente ceremony. 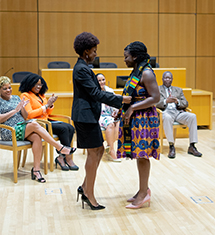 Tchokouani, one of eight students honored, noted her appreciation for the ceremony. “It’s important to celebrate students of color like this, and ensure that everyone is properly represented and celebrated.”

Carlesha Green Halkias ’05 served as the ceremony’s keynote. Halkias, who is a member of Dickinson Law’s adjunct faculty, has extensive experience in disability law and has held positions including executive director of the Office of Social Equity for Shippensburg University, staff attorney at the Disability Rights Network in Harrisburg, PA, and deputy city solicitor for the city of Harrisburg. She has provided assistance to clients about their rights under the Americans with Disabilities Act, Family Medical Leave Act, Rehabilitation Act, Age Discrimination in Employment Act, Fair Housing Act, Medicaid, Mental Health Procedures Act, and the Individuals with Disabilities Education Act.

Having once been in their shoes, Halkias shared her advice with the students. “As you leave this academic bubble of value elevated in status because of your J.D., know that it will also act as a weight. People will look to you and people will look at you while trying to figure out how it defines you. What matters most, however, is that you look at yourself along the way and through your journey, and that you honor yourself through your work and how you live your life.”

The ceremony is held annually in honor of Paul E. Waters ’59. Waters made history with Shumaker, Placey, Smeltz and Waters as the first attorney of color in Dauphin County to become a law firm partner, and the first African-American to serve as counsel to the Pennsylvania State Senate Judiciary Committee. In addition to his many legal accomplishments, Waters was also the founder and editor of the U.S. and Pennsylvania Judicial Reporters, both monthly periodicals of caselaw.

View photos from the ceremony here.
______________________________
Iman Woodyard ’21 (left), vice president of Dickinson Law’s Black Law Students Association, dons Charlene Akrasi ’19 with the traditional Kente cloth during the annual Donning of the Kente ceremony on Friday, April 19 inside the Apfelbaum Family Courtroom and Auditorium at Dickinson Law. Akrasi is one of eight graduating students whose heritage, unity and academic achievements were celebrated among family and friends.