April 18, 2019 — In recognition of his outstanding leadership, steadfast integrity, and enduring contributions to Penn State and the LGBTQA community, second-year law student Robert “Bob” Gavin was named the 2019 recipient of the Dr. Susan R. Rankin Award during a ceremony on Friday, April 12 at University Park. Staff and students from Penn State’s LGBTQA Student Resource Center and Advisory Board selected this year’s award winners.

Established in 2007, the award honors a student, staff member, faculty member, community member, or organization who has provided leadership and service to the LGBTQA community. 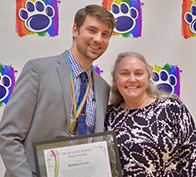 “Bob’s leadership, integrity and enthusiasm is inspiring,” said Assistant Dean for Admissions and Financial Aid Bekah Saidman-Krauss, who nominated Gavin for the award. “I wanted to honor his relentless advocacy for the LQBTQ community not only at Dickinson Law, but also around the Commonwealth of Pennsylvania and around the world.”

During his time as a law student at Dickinson Law, Gavin’s peers elected him president of OutLaw, the Law School’s LGBTQ student organization. One of his first official acts as president was to register the Chapter as an affiliate organization of the national LGBT Bar. As a result of his efforts, Dickinson Law’s OutLaw is now recognized and connected with other LGBTQ law school organizations across the country. Gavin worked relentlessly to urge members of the Dickinson Law faculty to understand LGBTQ oppression, create a safe and inclusive space for LGBTQ students, and increase awareness of this movement around campus.

Beyond Penn State, Gavin worked with the LGBT Center of Central Pennsylvania to organize a workshop on the legal rights of trans and non-binary individuals under federal, state and local law. On a global level, he is working to move the needle on international LGBTQ rights. Gavin has undertaken an effort to update the protection of international criminal law for LGBTQ people by drafting an optional protocol to the Law of Genocide. This protocol is intended to provide protections from people being discriminated against based upon their sexual orientation and gender identity. Once finalized, Gavin and his fellow student collaborators will solicit support from the national and international organizations, and eventually lobby the international community to adopt this protocol.

“Dr. Rankin is an incredible role model and advocate for LGBTQ+ communities, and I am very proud to receive her namesake honor,” said Gavin. “While this award is a wonderful recognition of the work done, it also serves as a reminder and recognition for the work yet to come.”
______________________________
Robert “Bob” Gavin, a second-year law student at Penn State’s Dickinson Law, received the Dr. Susan R. Rankin Award during a ceremony on Friday, April 12 at University Park. Established in 2007, the award honors a student, staff member, faculty member, community member or organization who has provided leadership and service to the LGBTQA community. Pictured with Gavin is Allison Subasic, founding director of the LGBTQA Student Resource Center at Penn State and wife of Rankin.