March 26, 2019 — Tom Ridge ’72, Pennsylvania’s 43rd governor and first U.S. Secretary of Homeland Security, will address the class of 2019 during Dickinson Law’s commencement on May 11, 2019, at the Anita Tuvin Schlechter Auditorium on the Dickinson College campus. 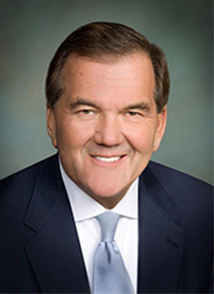 “Gov. Ridge has made numerous distinguished and significant contributions to the Law School, the Commonwealth, and the nation during his storied career,” said Gary S. Gildin, dean, Dickinson Law. “I cannot imagine a more appropriate individual to address our graduating class on the 185th anniversary of the founding of Dickinson Law.”

During his time in public service, Gov. Ridge built a reputation for fairness, hard work, exemplary leadership and advocacy.

He was twice elected governor of Pennsylvania, overseeing statewide progress in education and health care reform. He implemented a vision for employing technology to improve people’s daily lives and protect the environment.

Ridge left the governorship midway through his second term in 2001 to become the assistant to President George W. Bush for homeland defense. Two years later, on Jan. 23, 2003, he was elevated to secretary of the newly created U.S. Department of Homeland Security (DHS), becoming the first person to hold that office.

Ridge grew up in Pennsylvania and graduated with honors from Harvard University. He spent a year at Dickinson Law before getting drafted into the U.S. Army, where he earned a Bronze Star for Valor, the Combat Infantry Badge, and the Vietnamese Cross of Gallantry for his service as an infantry staff sergeant in Vietnam.

Following his military service, Ridge returned to Dickinson Law to earn his law degree. He practiced law privately and then as an assistant district attorney until 1982, when he became one of the first Vietnam combat veterans elected to Congress. He spent six terms in the U.S. House of Representatives.

Ridge currently serves as the chairman of Ridge Global, LLC. He also is partner at the Ridge Policy Group, as well as chairman of the Ridge Global Cybersecurity Institute. He is a member of Dickinson Law’s Board of Overseers as well as Honorary Chair of the Advisory Board of its Government Center for Law and Public Policy Studies. Ridge serves as the board chairman of the National Organization on Disability, and serves on other public and private boards.