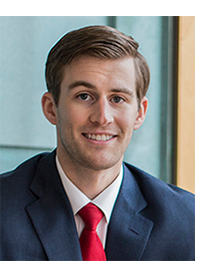 Established by Joseph L. Fink III and his family, the Fink Family Scholarship supports a pharmacist attending law school who demonstrates academic, professional or service-related achievement, and is most likely to use their law degree to further such achievement and contribute to the benefit of society.

“It is a great honor to be awarded this scholarship,” said Wagner, who after earning his doctor of pharmacy (PharmD) from the Philadelphia College of Pharmacy, chose to pursue his law degree at Dickinson Law.

“Attending Dickinson Law as a pharmacist has given me a unique perspective, and I have been able to tailor my legal education around pharmacy and health law,” said Wagner. “Working as a pharmacist part-time while attending law school full-time, I approach legal reasoning through the lens of a pharmacist—understanding not only the relevant law, but also how it impacts the pharmacy profession.”

During his first year of law school, Wagner has participated in Dickinson Law’s bi-annual Medical-Legal Colloquium, which allows medical residents from Penn State Children’s Hospital and first-, second-, and third-year Dickinson Law students to present an abbreviated civil trial centered on the issues of proving and defending against claims of medical negligence.

“The legal profession, like many other professions, is enhanced when different skillsets work together in a multidisciplinary fashion to solve problems,” said Wagner. “The Colloquium allowed me to gain courtroom experience as well as work with not only other law students, but also medical residents who bring a different perspective and way of thinking about the intersection of health care and law.”

After Wagner’s second year of law school, he combined his legal education with his pharmacy experience as a summer associate on the Pharmacy and Reimbursement team and Federal Drug Administration (FDA), Products Promotion, and Defense team at BakerHostetler in Washington, D.C. During his summer internship, he had the opportunity to co-author an article on controlled substances and regulations affecting the pharmaceutical industry.

In addition to completing Dickinson Law’s health law curriculum, Wagner is pursuing a Certificate in Corporate Compliance with a concentration in Health Care, and a Juris Doctor and master of business administration joint degree as part of Dickinson Law’s joint degree program.

Wagner shared that the legal education he has received at Dickinson Law has provided him with the foundation to proactively issue-spot potential legal implications for those in pharmacy and effectively communicate accurate legal information. “I am able to problem-solve on matters ranging from a pro bono death penalty case to issues affecting corporate clients and trade associations.”

Ultimately, Wagner says his overall goal is “to use my combined pharmacy and legal knowledge to be a policymaker and advocate. During my internship experience at BakerHostetler, I realized the impact and influence pharmacy lawyers can have on the profession. Being in the nation’s capital, I was fortunate to get a glimpse into how policy is made. I attended an FDA public meeting on opioids, which I found to be informative not only on content, but also on how I want to shape my career. Working as a policymaker within the FDA, another government agency, or as counsel to clients in the healthcare industry is a career goal of mine that I believe will allow me to benefit pharmacists, patients, and society as a whole.”