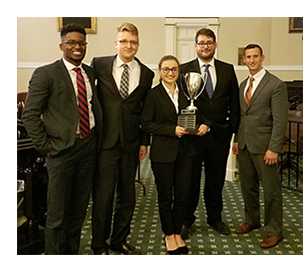 Hosted by Dickinson Law’s Moot Court Board, this year’s competition—named in recognition of Triston “Chase” O’Savio ’18 for starting the event during his third-year at Dickinson Law—was open to second- and third-year law students, and provided junior advocates the practice, training, and resources needed to succeed in regional competitions held each spring. Carroll, Giarratano, and Lindhome—members of the Law School’s American Bar Association (ABA) Moot Court Team—represented the plaintiff. Dickinson Law’s Environmental Team composed of Bacon, Honness, and Stobbe represented the defendant.

“Just as with regular moot court competitions that take place in the spring, students in the intraschool competition can gain experience working with appellate cases, arguing both sides of an issue, and of course, honing general public speaking and advocacy skills,” said Rebecca Marsnik ’19, executive vice chair of the Moot Court Board, who organized the event with the help of fellow board members. “Furthermore, students in the competition can gain a lot of ‘soft’ skills experience, including teamwork, empathy, and professionalism. It is also a fun way to build camaraderie, network, and maybe do something outside of their comfort zones.”

Preparing for the competition was hard work, according to Giarratano. “In the five weeks leading up to the competition, our team practiced delivering our arguments to a panel of judges who grilled us and did its best to throw us off track. Our coaches, Rebecca Marsnik ’19, Bob Heary ’19, and Dominik Maida ’19, along with several professors who served as guest judges at our practices, devoted many hours to making us better advocates. Every week was an opportunity to approach the argument from a different angle or analogize a case in a new way.”

As the Law School’s top advocates, Carroll, Giarratano, and Lindhome received the Christian R. Burne ’17 Award. Giarratano received the Francesca M. Kester ’17 Most Valuable Oralist Award. Both awards were established by last year’s Moot Court Board in recognition of the excellence in advocacy and leadership that Burne and Kester demonstrated during their time as law students at Dickinson Law.

“I was so excited when we won,” said Giarratano, who also shared that everyone she competed against was hardworking and talented. “I just grabbed my teammate Andrew in a bear hug. Winning Most Valuable Oralist was the best shock of my life.”

“When I look back on how much we learned and improved from the beginning of the semester, I could not be happier,” said Giarratano. “Looking forward, I am excited to learn more and am optimistic that we can continue to improve as advocates.”