September 27, 2018 — Throughout the fourth annual Convocation at Dickinson Law on Friday, September 21, every speaker returned to one word: community. The ceremony, which formally inducted the diverse, accomplished, and ambitious class of 2021 and master of laws students into the Law School during the 185th anniversary of its founding, emphasized the rewards of drawing together.

Dean Gary S. Gildin opened the afternoon by describing an academic community at Dickinson Law rooting for each student’s success as they navigate the next three years. 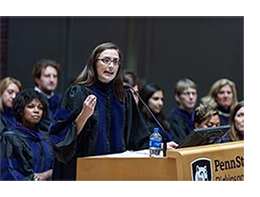 Keynote speaker Miriam Enriquez '05, director of the Office of Immigrant Affairs in Philadelphia, addressed the support she continues to receive from the Dickinson Law community, whether she is reaching out to former professors for advice or asking for input from fellow graduates on what to include in her Convocation speech.

Sean Kraus, the honor code chairman of the class of 2019, spoke in his closing remarks about the community in the Carlisle area that has afforded him numerous internship opportunities. From Dean Gildin’s inspiring opening to Enriquez’s heartfelt advice for new students to Kraus’ exhortation to find their voices, every moment of Convocation conveyed the honor of becoming part of the Dickinson Law community.

Dean Gildin began by welcoming students, who had already been attending classes for several weeks, to Convocation, which he described as “a cause to assemble or a calling together.” He noted that though Judge John Reed founded the law school 185 years ago, when Andrew Jackson was president and there were no other law schools in Pennsylvania, Dickinson Law’s promise remains the same today—to prepare students for greatness.

“Every one of these skills you’ll acquire over the next three years must be viewed and executed through the lens of your obligations as an attorney,” Gildin said. “These professional obligations are just as unique as the new way of reading and thinking that you’re currently learning. They are not only unique but also indispensable to your success.”

He then invited every incoming student to sign the statement on professionalism, a document “that acknowledges adherence to the professional standards that are the cornerstone to an enlightened and effective system of justice.”

Before the signing got underway, Enriquez delivered her speech, which focused on key pieces of advice for Dickinson Law students. First, she assured the students they had made the right choice of school.

“You are now part of a much larger community of people, people that will support you and look out for you,” said Enriquez, who spent seven years as an assistant district attorney in Philadelphia before becoming director of legislation and policy for City Councilman-at-Large Dennis M. O’Brien.

Enriquez described her excitement and also her fear when she was offered the job with O’Brien. She worried about leaving a position she was comfortable in to try something new, but with the encouragement of her family, former professors, and fellow Dickinson Law grads, she took the plunge. She called upon the class of 2021 to similarly push themselves beyond their comfort zone.

“Get uncomfortable,” she advised. “You should aim high. Don’t say to yourself, ‘That job would be great, but I could never do it.’ Or ‘that goal would be so fabulous, but I could never pull it off.’ Be bold, take risks, and own every single bit of it…If something scares you, that’s okay, but don’t let that fear stop you.”

Some of these students already have embraced that ethos. Dilawar Ali Fazal, who came from Pakistan to pursue his master of laws degree, admits he was uneasy about traveling 8,000 miles from home to a place “where I don’t know anyone, I don’t have any friends or family, and, most of all, where it snows. I was pretty nervous at the start, but during orientation, I felt like, ‘Okay, although this is going to be tough, I’m not alone. There are other students feeling that way as well.’”

He thinks the sense of community extends beyond the Law School and into the rest of Carlisle, where he said he has felt warmly welcomed as well. Fazal chose Dickinson Law over several other top programs partly because the small class size appealed to him. “[At another school,] I would have been a number. Over here, I’m an identity,” he said. “This, I feel, is something which distinguishes Dickinson Law from the other schools. Everyone will know you by your name.”

Like Fazal, first-year student and West Virginia native Michaela Cloutier loves the intimacy of Dickinson Law. After attending Yale University for her undergraduate degree, she was “drawn to the idea of a small community. At Yale, I felt like my interests and commitments — academic, social, and extracurricular — pulled me in a million different directions, so the prospect of having class with a small group of people, with the same courses and the same goals, going through the same trials and triumphs at the same time, was incredibly appealing.”

Almost half are the first in their family to attend graduate school, having earned masters’ of arts, arts in teaching, business, and science, as well as a doctor of pharmacy. Their accomplishments already are nothing short of impressive: among them are business, cyber and finance analysts and consultants; entrepreneurs; healthcare professionals; military personnel; project managers; research assistants; and teachers. They bring with them a continued desire to serve their communities, having volunteered with a variety of organizations across the country and internationally.

Casey Dennis, who attended Texas Tech prior to law school, said that she has enjoyed settling into her first year. “I am enjoying all of my classes, and I think the material is extremely interesting. I have even said that I have to be doing something wrong to be enjoying law school this much. It has definitely been difficult, and I am having to study really hard for every class, but it has been such a rewarding experience.”

Many other students feel the same. To close out Convocation, Kraus shared how he has thrived in the Dickinson Law community. “Classmates, as you face the challenges of law school, I exhort you to make sense of the challenges of the unfamiliar. Listen to your professors; listen to your mentors; listen to each other. You will hear the often-quiet truth,” he said. “Likewise, speak up in class, and in the corridors, even in the midst of confusion, for you will find that your voices are strong and bring order.”

The Dickinson Law community exemplifies the best of the best, Convocation affirmed, and every new and longtime member should feel proud. “When Admissions decided on you, it was because they wanted you, your voice, and your experience as part of this class,” Enriquez said. “Welcome to the family.”

Juris doctor and master of laws students participated in Dickinson Law's fourth annual Convocation on Friday, September 21, inside Lewis Katz Hall, Carlisle. Miriam Enriquez ’05, director of the Office of Immigrant Affairs in Philadelphia, gave the keynote address. The 2018-19 academic year marks the 185th anniversary of the founding of the Law school.