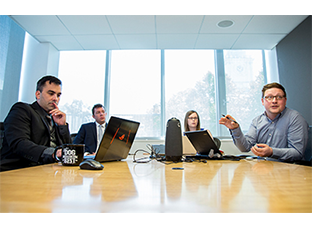 July 31, 2018 — With the number of opioid overdose deaths continuing to rise in Pennsylvania, a group of Penn State Dickinson Law students are becoming advocates and providing resources for those who are affected by addictions.

Led by Matthew Lawrence, assistant professor of law at Dickinson Law and assistant professor in the Department of Surgery at Penn State College of Medicine, the group of six students are working to develop and disseminate legal resources, promote informed policy making, and facilitate scholarly research in the states of Pennsylvania, West Virginia, Ohio, North Carolina, Rhode Island and Florida.

“The project, called the Addiction Legal Resources Team (ALRT), had its genesis in a paper I wrote exploring legal barriers families face when trying to advocate for a loved one who has substance use disorder,” said Lawrence. “While conducting a search for a research assistant to continue this work, I was overwhelmed by student interest in finding outlets to contribute to address the crisis. Several of our law students had a personal connection with the opioid crisis or work experience with addiction programs in their home states.

With the support of Dickinson Law Dean Gary Gildin, Lawrence was able to support six students part-time this summer. “Thanks to their passion, experience and home-state connections, the team has exceeded my expectations and developed several meaningful efforts in our first few short months. They’ve also inspired my own scholarship in this area,” Lawrence said.

ALRT student team members Bryan Caffrey, Andrea Jenkins, Evan Marmie, Tori Remington, Alex Short and Wyatt Weisenberg are working on various projects in each of their home states. Team members are disseminating and developing legal resources for patients and families navigating the legal system to assist them with obtaining insurance coverage for addiction treatment. They are also advising Penn State researchers on legal questions encountered in their research. The team meets weekly, with some students using Dickinson Law conference rooms to videoconference with the rest of the team to discuss projects, deadlines and new collaborations. Students then pursue individual projects during the week.

“The students are working together and with me to chip away at the issue and do something helpful. One major focus has been on insurance coverage for treatment, specifically resources related to the Paul Wellstone and Pete Domenici Mental Health Parity and Addiction Equity Act of 2008 (MHPAEA),” explained Lawrence. MHPAEA is a federal law that ensures group health plans and health insurance issuers who provide mental health or substance use disorder benefits offer coverage that is comparable to medical/surgical benefits coverage. Many individuals affected by substance use disorder are unfamiliar with the law and the challenging appeals process when receiving an insurance coverage denial.

“Our goal as a team is to research and present information for individuals or their family members who might be suffering from substance use disorder, helping them find medical treatment and navigate a rather convoluted regulatory landscape,” said ALRT student team member Bryan Caffrey.

The students are also conducting legal research in each of their home states and are developing policy memos for dissemination to scholars and collaborators. For example, they are sharing their work with the Parity of 10 project, which advocates MHPAEA in mental health and drug abuse cases.

The program has been a beneficial educational experience for the students as well. “One thing I’ve learned that is very important when it comes to researching health care policy and implementation is the important way that the administration of statutes comes into effect. It’s not simply enough to look at statutes, which might be natural for law students, but also look to how administrative agencies and corporations that administer health care have turned those statutes into actual practical policies that affect people every day in their lives,” Caffrey said.

Another student wrote a policy memo regarding several state and local programs and Lawrence encouraged him to circulate it more broadly. The memo ultimately appeared on Harvard Law School’s Bill of Health blog, and that student has been invited to contribute additional memos to the blog.

“The project has led to the students thinking more about the community side of the addictions crisis, focusing on the family and how to outreach and apply our legal research,” said Lawrence. “I can’t emphasize enough how much this effort has been inspired and driven by this passionate and talented group of students and what a privilege it has been to work with them. We are looking forward to continuing the addiction legal resources team’s work into the fall semester and beyond.”