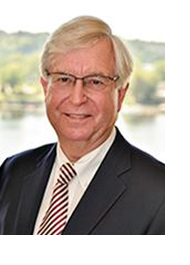 R. Burke McLemore Jr. is chair of Thomas Thomas & Hafer’s workers’ compensation section, where his practice encompasses both trial and appellate representation of employers and carriers from the Maryland line to New York. McLemore’s significant cases include Leon Wintermyer v. WCAB, the Pennsylvania Supreme Court decision that rewrote the standards for review of administrative agency decisions.

McLemore provides risk reduction and management advice to clients facing employment law and workers’ compensation claims. His nearly forty years of defense experience is applied to complex cases bridging employment torts, workers’ compensation, and subrogation. Burke has been consistently recognized as a Pennsylvania Super Lawyer and was cited in Best Lawyers in America.

The author of Heart Attacks and the Pennsylvania Workman’s Compensation Act, he regularly contributes to Pennsylvania Bar Institute presentations, and serves on the Board of Directors of the Institute. Burke is former chair of the Pennsylvania Workers’ Compensation Council; is a past president of the Dauphin County Bar Association, and currently serves in PBA’s House of Delegates. He was appointed by the Supreme Court of Pennsylvania to a second three year term on the Court’s Disciplinary Board in 2012. In 2014, the Supreme Court appointed him chairman of the Disciplinary Board.

McLemore formerly served as president of Dickinson Law’s Alumni Association. He received the school’s Distinguished Service Award, and in 2007 was named Outstanding Alumnus by the school. He was elected to three, four-year terms on Camp Hill Borough Council, the final four of which he was elected president. He served as statewide chairman of the committee to celebrate the Centennial Anniversary of the Pennsylvania Workers’ Compensation Act and received the 2016 PBA Special Achievement award for those efforts. Burke was the 2014 recipient of the Irvin Stander Memorial Award for professionalism and dedication to the practice of workers’ compensation. In 2016, Burke was elected a fellow of The College of Workers’ Compensation Lawyers.