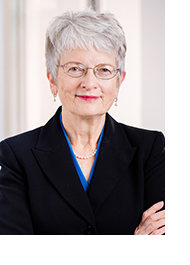 Mary D. France was appointed by the Third Circuit Court of Appeals to a fourteen-year term as a U.S. bankruptcy judge for the Middle District of Pennsylvania on March 3, 2003. From July 2009 through July 2016 she served as Chief Bankruptcy Judge for the District. On March 2, 2017, she retired from the bench. Before her appointment, Judge France served for ten years as the Assistant U.S. Trustee for the Middle District of Pennsylvania. The U.S. Trustee Program is a component of the U.S. Department of Justice, and supervises the administration of bankruptcy cases and private trustees. In 2003 she received the Director’s Award for Distinguished Service to the Program.

Judge France is a member of the American Bankruptcy Institute and the National Conference of Bankruptcy Judges. From 2013 through 2016 she served as the Third Circuit representative on the Bankruptcy Judges Advisory Group for the Administrative Office of the U.S. Courts. She also participated as a master in the William W. Lipsett American Inns of Court. Judge France earned her B.A. from Wake Forest University, her M.A. in American Studies from Florida State University, and her J.D. from the Dickinson School of Law.