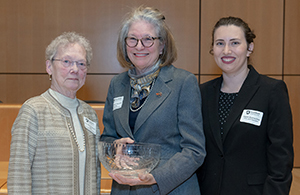 “It is a great honor to be chosen the recipient of this award,” said Leavitt. “It has caused me to reflect upon my 40 years in the legal profession and upon my alma mater, which gave me an excellent legal education. I treasure my time at Dickinson Law with marvelous professors, whose wit, wisdom and scholarship continue to provide me guidance.”

The Hon. Sylvia H. Rambo Award Ceremony is hosted annually by Women's Law Caucus. “Many of us in the legal industry have achieved our success in large part due to the mentorship by a knowledgeable mentor,” said Goycochea. “We host this award ceremony to renew our commitment of celebrating women in the legal profession who have both mentored other women and whose trailblazing accomplishments have inspired others.”

Since its inception in 1993 by the Women’s Law Caucus, the Rambo Award honors a female in the legal profession who has had a distinguished career and has paved a path for the success of other women in the legal profession. The annual event draws judges and lawyers from throughout the region and provides a networking opportunity for law students.

First-year law student Mari Boyle said the event was a great opportunity to network with extremely accomplished women in the legal profession. “Speaking with these women and hearing their stories was invaluable. I appreciated their candor in giving us their advice on how we too can make a positive impact through our legal careers.”

After earning her J.D., Judge Leavitt worked in the Pennsylvania Insurance Department for nearly a decade, ending her time there as chief counsel. Prior to taking office, Judge Leavitt was a shareholder in the law firm of Buchanan Ingersoll where she focused her practice upon administrative law, appellate practice and insurance regulatory law.

During her experience in the public and private sector, Judge Leavitt served as counsel of record in numerous appeals in both state and federal courts, including the Supreme Court of the United States, as well as an adjunct professor at Penn State.

Judge Leavitt was first elected to the Commonwealth Court of Pennsylvania in 2001. She was later retained for another ten-year term in 2011. In 2016, she was elected President Judge, becoming the eighth President Judge.

Judge Leavitt has published several articles in the Dickinson Law Review, has taught statewide seminars, and has addressed the Antitrust Section of the American Bar Association on the state action defense. She is a member of the Pennsylvania and Dauphin County Bar Associations and the James S. Bowman American Inns of Court.

This year, Judge Rambo celebrates 40 years on the bench. She has worked in private practice, as the chief public defender of Cumberland County, has been an adjunct professor at Dickinson Law, and was the first woman to take the position of Chief Judge for U.S. District Court for the Middle District of Pennsylvania. In April 1993, the Dickinson Law School’s Women’s Law Caucus created The Sylvia H. Rambo Award in her honor, and she was named its first recipient.

View a list of past recipients here. View photos from the Award Ceremony here.