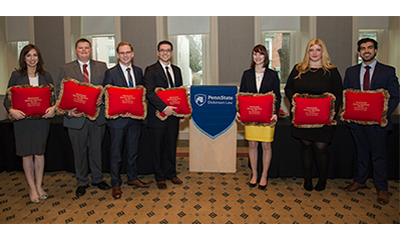 “This is an impressive accomplishment and one that required tremendous discipline, focus and dedication over a sustained period of time,” shared Dean Gaudion. “It is my hope that the perseverance and dedication that brought you to this day will serve you well as you launch into your next phase.”

Founded in 1920, the Woolsack Honor Society recognizes students who have distinguished themselves academically. Membership is earned by students whose academic accomplishments place them in the top fifteen percent of their class at the end of five or six semesters of work.

"I did not know much about the Society other than the qualifications needed to be inducted, but after attending the luncheon and receiving the recognition, I have fully grasped its importance," said Meredith Bush, one of nine third-year Dickinson Law students inducted into the Woolsack Honor Society. "The Society is not just a recognition of class ranking, but rather a realization that one is capable of and entrusted with becoming a great lawyer. I am proud to carry this honor and fully intend to live up to the expectations of the Society as I enter the legal profession."

Inductee Maureen Weidman said that she could not have earned this achievement without the support of her friends, family and classmates. “I am surrounded by some of the most brilliant people I have ever met, and I am truly honored that I have been able to learn alongside of them.”

“I am humbled to become a member of a group that includes so many great legal minds and outstanding citizens,” said inductee Logan Hetherington. “Moreover, I am thankful for my experience at Dickinson Law, which has been both challenging and rewarding thanks to the wonderful faculty and staff.”